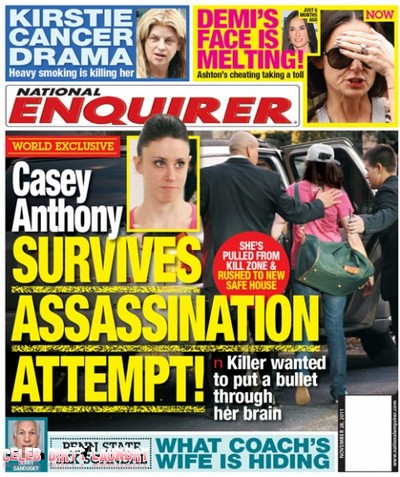 Many people hate Casey Anthony deeply for murdering her little daughter, Caylee, and yet being found not guilty by a jury of her supposed peers in Florida.  Casey is one of the most, if not the most, hated women in America and with this attempt on her life she may have to leave the country.  Sources say she is taking language lessons to prepare for her possible departure.

Casey who is presumably now living in Florida will finish her probation next year and apparently is afraid for her safety.   Many people are outraged by her ‘not guilty’ verdict and Casey fears for her life.  She has been receiving hate mail and sources suggest even her parents are estranged from her.  Sources say “She would love to go out to meet friends and do public things but she knows she can’t.”

This assassination attempt is just the first of several that Casey might face in her uncertain future as the murder mom who got away with it.  Goes to show that sometimes karma is a bitch.