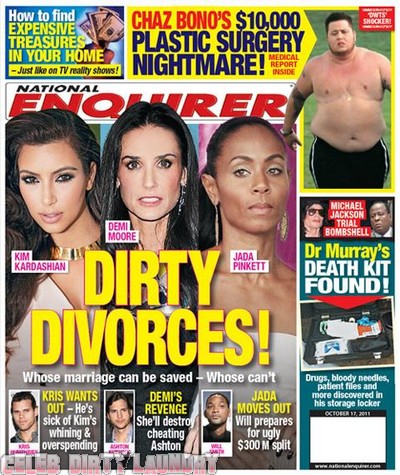 According to the National Enquirer, Hollywood is aflutter with a string of nasty divorces! Of surprise to absolutely no one is Demi Moore and Ashton Kutcher’s rumored divorce.

Also included in this divorce drama are Kim Kardashian and her man, Kris Humphries! And even though Jada Pinkett-Smith and her hubby Will have always denied any divorce rumors, they’re also gracing the cover of the magazine!

Kris is said to want out of his marriage to Kim because he’s sick of her whining and overspending. Demi is said to be getting revenge on her cheating husband and will destroy him. They’re also reporting that Jada has moved out and Will is planning their $300 million divorce.

Also featured in this issue is Chaz Bono’s $10,000 plastic surgery nightmare! Of course they can’t forget to include something about the Michael Jackson manslaughter trial. Apparently they’ve found Dr. Conrad Murray’s “death kit” inside of a storage locker. That contains bloody needles, drugs and patient files!

Do you believe that Demi and Ashton, along with Kim and Kris and Will and Jada are all going through high-profile divorces? Or are they just putting that out there for magazine sales? Sound off in the comments below and let us know what you think!