New Year’s Eve Parties Are A Big Deal For Celebs — Where Will Kim Kardashian Be Partying? 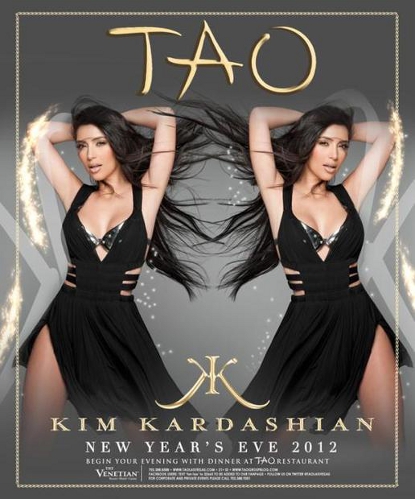 Turns out that if you want a borderline famous individual to drop by one of your off-the-chain New Year’s Eve parties, all you’ve got to do is shell out a minimum of $100,000 and they’ll be all over your party like jewels on a Kardashian. Las Vegas nightlife expert Jack Colton says that “the average New Year’s Eve fee for relevant talent is $100,000. An A-List celebrity moves up to $250,000, and a major grab can go as high as $1 million. Your Lady Gaga’s and Jay-Zs would be considered major grabs.”

Who wouldn’t want Lady Gaga at their holiday party? Turns out every talent/event booker in the nation wants eye-popping talent, but the reality of it all is that each celeb can only be booked at one place. Competition, as always, was incredibly fierce among talent seekers this year to get the biggest stars at their venues.

One of the big draws this year is Kim Kardashian, who’ll be ringleading the crazy partying chaos at TAO, a trendy nightclub in Vegas where Kardashian filmed many scenes for her show. According to multiple sources, TAO is paying the reality show vixen $600,000 to make a series of appearances at their club, which will begin the night of New Year’s Eve.

It doesn’t matter what kind of celebrity you are, if a person has even an ounce of Hollywood blood in them, New Year’s Eve is the night they all try to bring in the dough.

Rob Kardashian — who, let’s be honest, is really only famous because of his family name and the fact that he was a recent contestant on Dancing with the Stars — will host a party at Tryst inside the Wynn Casino. He’ll be charging $175 a ticket, fifty dollars lower than his sister’s asking price.

Other celebs that are looking to cash in on the night are Mario Lopez, who’ll be hosting “Big Bang NYE” in L.A., and nearly every other TV host/personality that can pull off a cheezballs smile with little effort.

Tom Cruise’s son, Connor, who has recently gained publicity for his DJ persona “DJ C-Squared,” will host a party in L.A. as well.

And, for those out there who prefer a somewhat mellower eve, there, as always, will be several televised shows to help bring in the New Year:

1. ABC’s New Year’s Rockin’ Eve, hosted by Dick Clark and, the king of the cheesy smile himself, Ryan Seacrest. This is going to be one of the hottest shows, with special performances by Lady Gaga, Nicki Minaj, Florence+The Machine, The Beebz, Taio Cruz, and many many more. If you’re not out getting crazy somewhere, make sure to check it out.

4. The CNN special with Kathy Griffin and Anderson Cooper . . . This is one of my favorites, simply because I like watching Anderson Cooper shake in his boots as he attempts to weather an entire night next to the crazy red head Kathy Griffin. In a funny quote, Anderson says: “Kathy Griffin scares me. I’ve said this often to CNN management directly and through my attorneys. She continues to appear by my side on New Year’s Eve, so clearly no one is listening to me.”

5. MTV’s NYE in NYC 2012 hosted by Teen Wolf’s Tyler Posner as well as Demi Lovato. This might actually be a decent one. Might have to check it out.

Make sure to check out your local TV listings! Or, if you’re not going to be home that night, which I imagine most of you won’t be, make sure to get that DVR prepped and tape all the hot performances. If you’ve got any hot New Year’s Eve news or know where any hot celebs are going to be partying, make sure you tell us below.

AND . . . if any of our readers find themselves in close proximity to a celeb (or one of their parties) on New Year’s Eve, snap a pic of yourself/the party/etc. and send it to us!