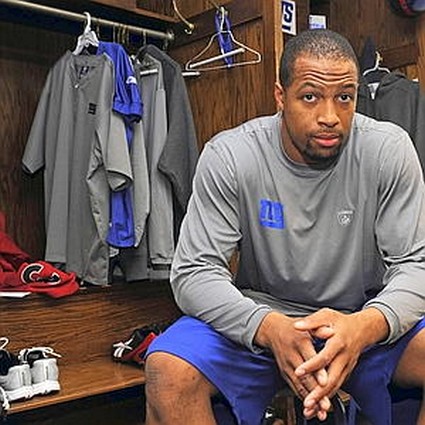 New York Giants star Michael Boley is under official investigation for repeatedly abusing his five-year-old son this spring. The official report, obtained by TMZ, accuses Boley of ‘the repeated willful abuse of a child under 18 from May 30 to June 5.’

Boley is now also suspected by a different woman in Georgia who has a two-year-old with the linebacker of the same problem. She filed court papers that request Boley be under supervision while with their child.

Boley has a history of violence against smaller and weaker people than himself. In May of 2008 Boley’s wife, Chantelle, accused him of assaulting her and throwing her out of their home following an argument. In his account in a police report, Michael Boley acknowledged a confrontation and that he put his wife out of the house. He was arrested on a misdemeanor domestic battery charge.

Alabama’s Gadsden Police Department will not release further information surrounding the alleged abuse – Boley hasn’t yet been formally charged. The case has been handed over to the District Attorney’s Office, which will then present the case to a grand jury. Only then will the jury decide whether or not there is sufficient evidence to charge him.

In an attempt at Boley’s defense his attorney, Randall M. Kessler, told Fox Sports that he was made aware of the accusations a little over a year ago during a child support case for Mr Boley’s son. Kessler said that at the last trial, which took place ‘about a month ago, (the child’s mother) did not seek an order restricting visitation.’

There does seem to be a pattern of behavior here and it does not reflect well on Michael Boley.