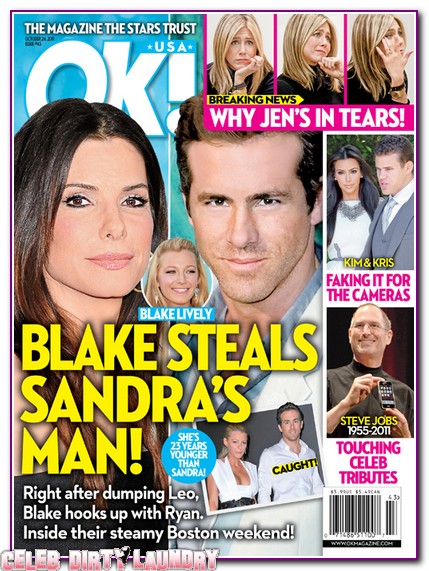 The October 17th, 2011 issue of OK! Magazine features the cover story “Blake Steals Sandra’s Man.”  The magazine is claiming that right after Blake  Lively dumped Leonardo DiCaprio she hooked up with Ryan Reynolds for a steamy Boston weekend!  Ryan was rumored to be dating Sandra Bullock and is said to have dumped Sandra for new love Blake.  This is the second heartache for Sandra‘s whose heart was broken by her cheating hubby Jesse James.  It looked like she found happiness with Ryan Reynolds who was 23 years her junior but sadly the magazine says she has been dumped again!

OK! has more:  While Sandra’s rep denies she and Ryan were dating, a source insists, “Sandra is crushed. She’s doing her absolute best to hold her head high and act as if she’s not bothered, but the truth is, she’s very hurt.”  In recent weeks Ryan and Blake have been seen kissing all over Boston, where he’s filming his supernatural thriller R.I.P.D.

“For a while things between Ryan and Sandra] were going so well, and she really got her hopes up,” the source adds. “That’s why she surprised Ryan by going to the premiere of his movie, The Change-Up. And then last month they had an incredibly intimate trip to her place in Wyoming. But then all of a sudden, Ryan went cold on her.”

The magazine has all the info on how Sandra and her son are coping with the split-up.   Also featured in this week’s magazine more rumors about Kim Kardashian and Kris Humphries and how there is trouble in paradise.  Apparently they are having problems with her spending and his partying and his resistance to living his life in the public eye.

To find out all this and more pick up the current issue of OK! Magazine!