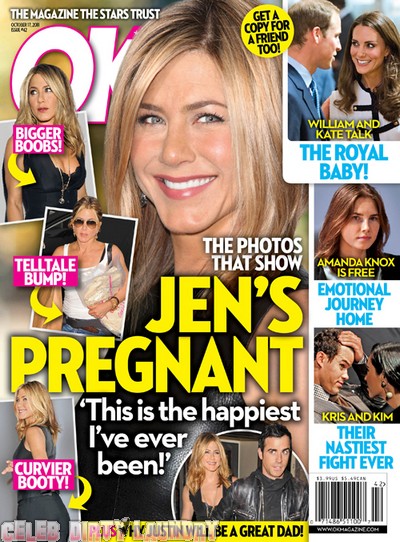 OK! magazine must think they have the most huge scoop on Jennifer Aniston, with their new “Jennifer is pregnant!” story. Like she would run to them first to share the happy news.

Sure, Jennifer has already shacked up with her boyfriend, Justin Theroux, but that doesn’t mean that she finally realized that her biological clock was ticking and that she needed a baby RIGHT NOW.

Remember, when she and Brad Pitt parted ways, it was rumored because he wanted a large family and she wasn’t ready for children? Perhaps she really just wants to wait? Or adopt? Or wait to adopt?

According to their inset photos, she’s sporting bigger boobs, a baby bump and a curvier booty! All of which can be attributed to eating a cheeseburger or two too many. Is OK! really just calling Jennifer Aniston fat? Inquiring minds want to know. < --wrong tabloid, my bad. The only thing I'm guessing that they've gotten right with this cover is the fact that she probably is the happiest she's ever been. Also featured in this issue are Prince William and Kate Middleton talking about their royal baby plans. Amanda Knox’s emotional journey home also garnered some space on the sidebar. In addition, Kim Kardashian and Kris Humphries are in the middle of the nastiest fight ever — will that be televised, of course? Because there’s no real use in wasting that kind of drama just for print, right? Famewhore it out right, people!

Do you believe any of this? Sound off in the comments below and let us know what you think!