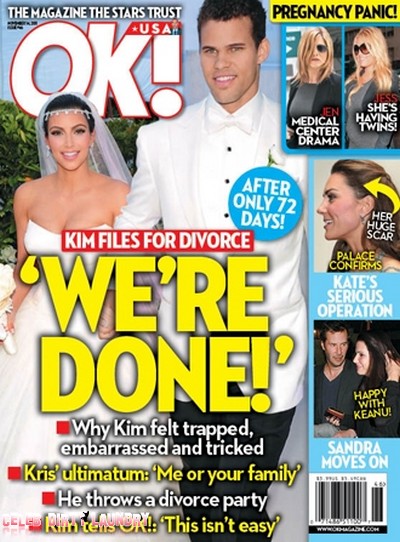 The November 7th issue of  features the cover story – ‘Kim Kardashian Files for Divorce — What Really Happened’ and asks the question that is on everyone’s mind now. And the setting for their answer is the Lavo nightclub in NYC on Saturday night which ‘was crowded with happy Halloween revelers when Kim Kardashian walked in at 9:10 p.m. wearing a Poison Ivy costume — but without her usual megawatt grin.’

OK! Magazine says that Kim was not in a partying mood at all:  “She looked fragile, sad and barely smiled,” says a witness at the Saturday night party. “She didn’t seem to be having any fun.”

Instead of being accompanied by her husband, Kris Humphries, Kim was with her longtime friend Jonathan Cheban. Kim “spent most the night texting and sharing those texts with Jonathan,” says the witness. “She never even took a sip of her drink.”

OK says Kris was surprised by the news and that he had no idea that Kim was filing legal papers on Oct. 31 before she flew off to Australia — a trip that Kris, 26, had expected to accompany his wife on.

Kris’ pal said: “It was supposed to be a second honeymoon, but she told him she would be too busy. Kris was bummed.”

Instead of taking Kris with her, Kim traveled with her brother-in-law Lamar Odom.

OK claims that even after Kim’s legal motion became public Kris seemed to be in denial saying: “I love my wife and am devastated to learn she filed for divorce – I’m committed to this marriage and everything this covenant represents. I’m willing to do whatever it takes to make it work.”

But here is the kicker – OK reveals that according to insiders Kris already throwing several parties to celebrate the divorce!