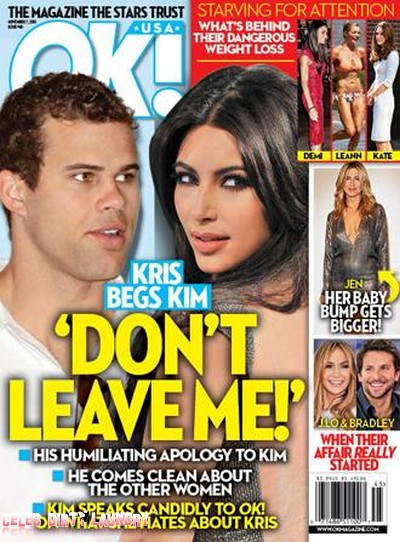 The October 31st, 2011 issue of OK! Magazine features the cover story ‘Kris Begs Kim, Don’t Leave Me!’  The magazine claims to have all the details about Kris Humphries humiliating apology to Kim Karadshian.  They also claim that Kim has spoken candidly to them on what she hates about Kris.   The past couple of week’s the tabloids have been full with claims that there is trouble in paradise for Kim and new new hubby Kris.  Apparently Kim is putting pressure on Kris to improve how he behaves and his attitude.  He is errr not classy enough for Kim LOL!

Kim confessed to OK! : I used to clean up all of his stuff, but now I am like, ‘Okay, you have got to get it together. You really have to pick up after yourself now.  That’s been a challenge. He likes to be a little lazy, though he wasn’t as lazy before.”

When Kris and Kim were still dating, his sarcastic sense of humor also made her giggle, but it became no laughing matter once he started picking on her family, especially sisters Kourtney and Khloe.

“Kris has a mean streak,” a confidante says. “He can be cruel, a jerk; he doesn’t get that what he does has  consequences and that people can have their feelings hurt. He says whatever comes to his mind.”

Kim Karadashian loves to have the cameras follow her everywhere she goes.   She makes every day a media event, she is a true Mediawhore.  Perhaps Kris is getting tired of it all.   If they split it won’t surprise me at all!

Also included in this week’s magazine they have all the details of why Kate Middleton and LeAnn Rimes can’t stop losing weight.

If you want to find out about Kim and Kris’ marriage and w whole lot more pick up the current issue of OK! which hits stands Thursday!