OK! Magazine: Kris Humphries His Side Of The Divorce Story (Photo) 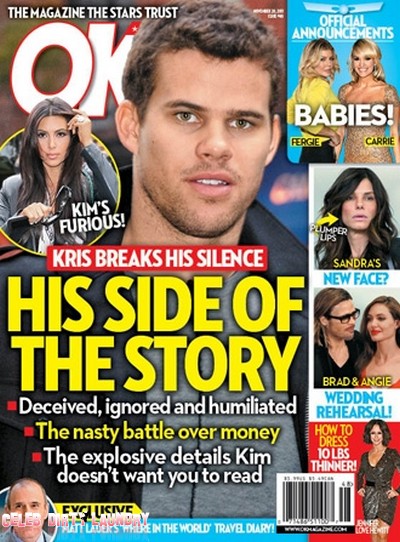 The current issue of OK! Magazine features the cover story “Kris Humphries: His Side Of The Divorce Story.”  Everyone was shocked when Kim Kardashian announced that she was divorcing Kris Humphries after just 72 days of marriage.   We were not shocked that the two were divorcing but that the marriage ended so soon.   We always thought that the marriage was all a sham to make money.  Now OK! is claiming that the marriage was actually over after just two weeks of marriage and they have the scoop on Kris’ side of the story.  How poor Kris was deceived, ignored and humiliated.  They also have the explosive details that Kim does not want you to read.

OK! has more: “He really thought she just gave up too quickly and didn’t even try,” an insider says. “It came out of nowhere — he really didn’t see the divorce coming. He’s angry and also very sad.”“He feels like no one cares what he has to say or wants to hear his side of the story because Kim is a bigger celebrity,” says the insider. “People care more about her.”

Kris has claims he was blindsided by the divorce and did not know Kim was going to file.   Poor Kris did not know the marriage was a sham he thought he was getting married for real – for life!  An insider reports, “It’s been painful. Kris said that he never thought in a million years she would file for divorce without giving it a chance,” the insider says. “He wanted to try. He thought in a few weeks things would be smoothed over.”

At this point Kim’s biggest worry must be the amount of negative publicity she is getting for making a mockery of marriage.  I am sure the wheels in Kim’s head must be turning to try to figure out a way to put a posititve spin on the mess.  Good luck to her, not!