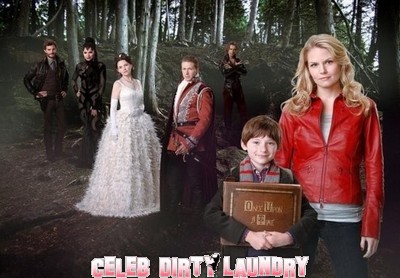 Once Upon A Time is ABC’s new fantasy/drama.  Stay tuned as we cover the show with up-to-the-minute details.   Some info about the show it was created by by Lost’s Edward Kitsis and Adam Horowitz.   The show centers on a woman with a troubled past who is drawn into a small town in Maine where the magic and mystery of Fairy Tales just may be real.  The cast includes includes Ginnifer Goodwin, Morrison, and Robert Carlyle.

Tonight’s recap: The Prince comes upon an outdoor funeral scene and snow white is dead with the seven dwarfs surrounding her.  The Prince asks the  dwarfs to open her casket so he can say goodbye.  He bends down to kiss her and she opens her eyes and says “You found me” – all brightens and  the prince tells her he will always find her.  Next  we are at her wedding where Snow White marries the Prince.

There is a loud noise and the Evil Witch walks in proclaiming ‘Sorry I am late’  Snow White grabs the Prince Sword.  The Evil Queen tell them she is not here to ruin their wedding she is here to give them a gift.

She says: “Soon everything you love, all of you love will be taken from you and out of your suffering will rise my victory.  I shall destroy your happiness if it is the last thing I do.”   The Prince screams and throws his sword which stabs her and she vanishes into a cloud of black smoke.

Then we are back in present time with a young boy who gets off the subway carrying a fairy tale book – he tells a fellow passenger ‘this is way more than a book.’  He comes out of the station and grabs a cab,

We meet Hanna (Really Emma using fake name) and Ryan who are having an internet date.  Today is Hannah/Emma’s birthday who is a loner with no family.   Hanna/Emma decides to try and guess who he is and then tells him he is married and many details about him.  It seems Hannah is a bail bonds-person and Ryan has skipped bond.  Ryan runs out of the restaurant with Hanna/Emma in hot pursuit.   Ryan jumps into his car but it cannot move because it has a Denver Boot on it.   Hanna/Emma comes over and smashes his head into the steering wheel.

Emma gets home and lights a candle in a cupcake, today is her birthday.  The door bell rings and the young boy from  the subway is there.   He asks if she is Emma Stone and She asks who are you and he responds I am your son.

She asks where his parents are and he asks Emma if 10 years ago she gave a baby up for adoption.  She asks him to give her a minute.  She is going to call the police and he says he will tell the police she kidnapped him.  She does not believe him – says he is a liar.  He asks her to come home with him to Storybook, Maine.

Back to the fairytale Snow White is pregnant and The Prince is trying to reassure her that the Evil Queen is not going to do anything.   Snow White asks to speak to ‘him’.  Whoever ‘he’ is he can see the future, but he is locked up somewhere.

Back to present time Emma is driving Henry (the kid) back to Storybook, Maine.  Emma asks him what he is holding a fairytale book and Henry tells him it is not a fairytale everything in the book is true.  Apparently she should know because she is in the book.

Back to the fairytale Snow White and Prince Charming are going to see an imprisoned mad genius – it’s Rumpelstiltskin!   He knows why they are there and Snow White wants him to tell what he knows.  He will but they have to give him something.  He wants their unborn child’s name and Snow White want to know what he knows.  He tells her that the Queen has put a curse where they will all be locked up in time while they lose everything they love and there will be no more happy ending and the Queen will relish her victory.  Rumpelstiltskin tells Snow White that her baby is the only hope, they need to get her to safety.   At her 28 birthday she will come back and the final battle will begin.  Rumpelstiltskin asks what her name is and Snow White replies ‘Emma.’

Back to present Emma and Henry arrive in Storybook, Maine.

Emma asks him for an address and he replies ’24 not telling you street’  He tells Emma time is frozen in this city, the Evil Queen did it.  The Evil Queen sent fairy tale characters here and they are stuck.

Archie comes over and Henry tells him that Emma is his Mom.  Apparently Henry is the mayor’s son.  Archie is Henry’s psychiatrist.   Henry tells her no one in the town remembers or even knows that they are fairy tale characters.

Back to the Fairy Tale they are having a meeting and Prince Charming wants to take the Evil Queen out.  The Prince tells Snow White that good cannot lose.  In comes a fairy with an enchantment tree.  She wants Geppetto to fashion a vessel to protect the baby.  The tree can only protect one person.

Back in present time Henry tells Emma that his step-mother does not love him and out she comes and asks Emma if she is Henry’s birth mother – she looks like the Evil Witch/Queen!.  She asks Emma if she wants a glass of the best apple-cider.    Henry’s mom tells Emma that since she became Mayor he has been having difficulty.   She is strict with Henry but she wants him to excel in life.

Emma tells him that maybe it is because he thinks that everyone in the town is a fairy tale character.  The mayor says she knows nothing about it.    Emma is suspicious but leaves heading back to Boston.   As she is driving she looks over and sees his fairy tale book and all of a sudden there is a wolf in the road and she swerves to miss him.  She passes out and the book flips open to a page where Geppetto and Pinocchio are carving the vessel for Snow White’s baby.

They were planning to put Snow White in the vessel to protect her and the baby, but the baby is coming and since there is only one place in the vessel they both won’t be able to do.   Meanwhile the sentries  – seven dwarfs – see the curse coming as a huge storm.

At the town jail Emma is locked up.  The sheriff  believes she was drinking, but Emma tells him there was a wolf.  The mayor walks in and Henry is missing again.  Emma tells them to let her out and she will help them find him.  She goes to Henry’s computer and discover he bought something with a credit card, the name on the credit card is his teacher’s.

Over at school we find out that Henry’s teacher is actually Snow White (of course she doesn’t know it – she is in fact Henry’s grandma).  The mayor comes in and asks the teacher if she gave Henry her credit card to find his birth mother.  She says know but looks in her purse and it is missing.  His teacher is the one who gave him the book.  The mayor stomps out.   Emma asks his teacher how the book will help Henry.  The teacher tells Emma that Henry has not had the easiest life.  He struggles with the fact that he was put up for adoption.  She tells Emma she gave Henry the book so he could have hope in a happy ending.  The teacher tells Emma to check his castle – she may find him.

Back to the fairy tale Snow White is giving birth while the curse is coming. The safe chamber is ready (The vessel) and the Evil Queen is on her way.  Emma is born and Snow White realizes that the Vessel only takes one.  She tells Prince Charming to take the baby to the vessel to give her the best chance.  They kiss Emma and say goodbye to Emma.  Prince Charming takes Emma and battles the curse to save the baby.  Prince Charming is wounded but kills the curse invaders.  He takes Emma to the magic wardrobe, kissed her on the forehead, tells her to  find us’ and closes the wardrobe.  He comes out and gets stabbed and died.  The evil warriors open the wardrobe and it is empty.

At the playground Emma finds Henry and gives him the fairy tale book.  Henry tells him it is her destiny to fight a battle.  Henry tells Emma he knows why she gave him away – she wanted to give him the best chance.  He tells her he know that because it is the same reason Snow White gave her away.

Emma tells him his best chance is not with her.  Henry asks Emma to give him one week.  Emma tells him her parents left her in a basket and she grew up as an orphan.  Emma tells Henry his mother is trying her best.  Henry tells Emma she was not abandoned that she was transferred by the wardrobe there for her own safety.  Her papers tried to save her from the curse.

Back to the past Snow White comes upon a dead Prince Charming.  As per the Evil Queeen’s curse takes effect everyone is losing what they love.  Snow White kisses Prince Charming on the lips twice but he does not come back alive.  Evil Queen walks in and tell Snow not to worry – in a few minutes she won’t remember anything.

Back to present time Emma brings Henry back to his mother who thanks her.    Emma tells Henry’s mother yesterday she made a wish on her birthday she would not be alone and then Henry showed up.  Henry’s mom tells her not to make any mistake this was not invitation to come back in Henry’s life.  She tells Emma she has no legal rights and she will be held to it.  The mayor tells her if she does not go back in her car and leave she will destroy her.  Emma asks her if she loves Henry and she replies ‘Of Course I love him’ but Emma is not convinced.

The Mayor walks down the stairs with Henry’s Fairy Tale book called ‘once upon a time’ and looks in the mirror.

Henry’s teacher (Snow White) is a volunteer at the hospital and Prince Charming is in a coma.

Henry is staring at the clock that does not work and Emma is going to Granny’s bed and breakfast.   She is getting a room in the town.  Rumpelstiltskin shows up and tells Emma she has a lovely name and wishes her a nice stay.

She is told he is Mr. Gold and he owns the whole town.  Emma tells Granny that she will be in the town for one week.   The clock that was broken starts to work as Henry smiles!!  Only Emma can make time start again and break the curse.

How did you like the show?  Sound out in the comments below!!!