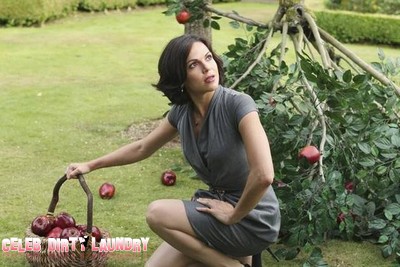 Tonight is the second episode of Once Upon A Time and it is called ‘The Thing You Love Most.’  Stay tuned as we cover the show with up-to-the-minute details.  The much anticipated series premiered last week and it is certainly a ‘much watch‘ series.  Last week we met Emma a woman with a troubled past who is drawn into a small town in Maine where the magic and mystery of Fairy Tales exists.  The  series takes classic characters and adapts them to the modern-day world.  If you missed last week’s episode you can read our official recap here!

Tonight’s episode:   The Mayor Regina, comes to Emma Swan‘s door and tells her that the honeycrisp trees make the best apples and she is yet to taste anything that is better.  She tells Emma she will enjoy her trip back home.  Emma tells the Mayor she is not sure she is leaving and she does not like threats.  Emma wants to make sure that Henry is okay.  The Mayor tells Emma that she is taking care of Henry and he is in therapy. The Mayor tells Emma not to underestimate her.

The Evil Witch is meeting with the evil people and the giant ogre –  she needs a lock of the most of the evil peoples’ hair.  They decide to give the hair to her as she threatens them.  She just needs as the final ingredient the heart of her childhood steed.  She proclaims her wrath should be released  and nothing seems to happen.  A evil dwarf starts to laugh at her and she turns him into stone.

Regina, the Mayor is visited by a detective – the man who she has asked to find out about Emma. He really has found out nothing.  The Mayor tells him she throws things away that have no value, and he promises to keep looking.

Emma is in a restaurant and the sheriff sends over cocoa to her or so she thinks – but it was actually Henry.   Emma wants to know the deal with Henry and her Mom.  Henry tells Emma it has to do with the curse and Henry has a plan.  Emma goes to eat the apple the Mayor gave her and Henry tells her not to eat it and grabs it and tosses it away.  Henry fills Emma in on the details of the town.  Henry tells Emma she is the only one who can break the curse.  Henry tells Emma she has the advantage because his Mom does not know that Emma is the daughter of Snow White.

Henry is happy because Emma believes her.  Henry’s teacher comes over to Emma and Emma asks her how the Mayor could be the Major given that she is such a bi**h..  She tells Emma everyone is afraid of the Mayor and that she has been the Mayor as long as she recalls.  Emma asks the teacher who Henry thinks she is and The teacher replies ‘Snow White.’

Emma goes to visit the doctor that is treating Henry.  She wants to know what the fairy tale obsession is all about.  The therapist tells Emma Henry is using the book to deal with his problems.  Regina, Henry’s Mom has attempted to bring Henry closer but it has only backfired.  He gives Emma Henry’s file to look over.  He tells Emma to watch how she handles his belief system.  Destroying his imagination would be devastating.

As soon as Emma leaves he calls Regina-the mayor and tells her Emma took the file.  Its a frame job.

Emma is back at her hotel and the sheriff shows up and he wants to talk to Emma about her getting into a fight with the doctor. Apparently, the doctor reported that Emma stole Henry’s files from him. The Sheriff finds the files and arrests Emma. The fix is in.

Emma is getting her mug shot taken and tells the sheriff that the Mayor is putting everyone up to frame her with the doctor. Henry shows up at the police station and tells Emma she is a genius because he knows she was gathering info. Henry tells Emma that his teacher will be bailing her out. Teacher says to Emma ‘I trust you’ – of course she trusts Emma… it’s her daughter!! Emma gets uncuffed and heads over to the Mayors with a chain saw and starts cutting down her trees.

Emma tells the Mayor if she comes after her again, she is coming after her and she has no idea what she can do. Her parting shot is ‘your move.’

Back to the fairy tale, the Evil Queen wants to know why the curse is not working. She is told it is a dark and lonely road and once she goes down it trying to find out why it did not work there is no turning back.

Rumpelstiltskin is in his cell when the Evil Witch shows up. She asks him about the curse and tells him it is not working. He tells the Evil Witch that Snow White showed up to see him too. The Evil Witch wants to know what he told them. He replies the truth of course – that all curses can be broken and the child of Snow White and Prince Charming can do it. The curse has to be activated but he needs something from the Evil Witch. He wants a new land and an estate and he wants the Evil Queen to give grant his every request if he says ‘please.’

Rump says that to make the curse work she must sacrifice someone closest to her. She tells him she already sacrificed her prize steed. He tells her it is not good enough, she must sacrifice something she really loves. She has to ask herself how far will she goes and she replies as far as it takes. Rumpelstiltskin tells her to stop wasting time she knows what she loves and go kill it.

Emma comes back to her room and the owner of the Rooming House asks her to leave. There is a city law that no felons can stay. Emma gives her the room key.

Emma tells her she has no soul and asks how she got like this.

Back to fairytale time The Evil Witch stomps in and her servant asks if she found out how to activate the curse. He ask how bad is it maybe he can help. She tells him she has to cut out the heart of the thing she loves most. The servant replies ‘Me’ She then says Daddy I don’t know what to do I have to do something. I can’t keep living like this. It is eating her alive. Snow White’s very existence is impossible for her to stomach.

She agrees with him and tells him she can be happy but just not here – she then pulls her fathers heart out. She is a woman who knows what she wants and is prepared to kill her own dad to get it.

Emma tells her she is leaving, she thinks it is for the best. She feels if she stays Henry will be hurt. The teacher tells her for the reason she thinks she has to leave, she has to stay. Who will protect Henry if she leaves.

Henry is at the psychiatrists (Jiminy Cricket) office and Emma enters – the shrink says the May or forced him to collude against her and Emma Swan apologizes to Henry. Emma tells Henry she stayed because of him and she does not think he is crazy she thinks the curse is crazy. Just because it is crazy does not mean it is not true. Emma tells Henry she told his Mom what she need to hear. Emma tells Henry that they need to tell the Evil Queen/Mayor what she needs to hear to throw her off the trail. She tells Henry they need to destroy the pages so she will never see them and throws them into the fireplace and burns them.

She tells Henry she is there to help and a curse is not going to stop her.

Back in the fairy tale the Evil Witch is trying to activate the curse again now that she has her father’s heart. She goes to her father’s grave and we find out his name is Henry and she says ‘I love you Daddy.’

The Mayor is fixing her tree and Mr. Gold (Rumple) shows up and tells her he was in the neighborhood and decided to stop by. She tells him she got rid of Emma and Mr. Gold tells her he would not count on that – he says Emma and Henry are thick as thieves.’  The Mayor blanches! Mr. Gold tells Regina she should have come to him and he could have helped. She tells him she is not ready to make deals with him anymore. He says ‘oh the boy that I procured for you’ – She asks him where he got Henry. He says he has no idea what she is implying. The Mayor Regina asks who Emma is and Mr. Gold says he thinks she knows exactly who she is… . Mayor accuses Gold of helping to bring Emma back intentionally. She also starts to realize that he knows everything and remembers everything when he says ‘get out of my way PLEASE.” Please was the magic word he told her he would use back before the curse was enacted and he was still Rumpelstiltskin in fairy land. He tells her he has no idea what she is talking about – with a smirk.

Loved the show!  What about you are you enjoying it?