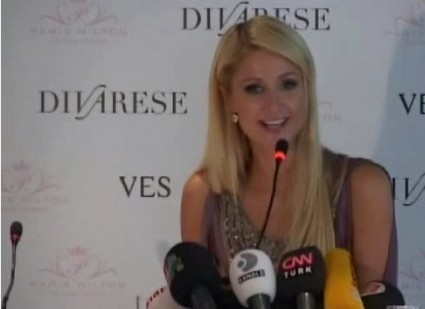 Paris Hilton gave a press conference in Istanbul, Turkey this week as part of her current business tour which will see her arrive in Mumbai, India on Saturday.

During the conference Paris spoke about her 15 years of experience in business – beginning when she moved to New York City at 15 – saying that she is first and foremost a businesswoman and that her business is based around the Paris Hilton Brand.

Paris explained that she signed on with Donald Trump’s modeling agency when she moved to New York and while doing her reality show ‘The Simple Life,’ Paris hooked up with her global branding agency, The Beanstalk Group.  Paris praised Beanstalk with whom she continues to collaborate in the development and unprecedented success of her brand.

Apart from her experience and continued involvement in the entertainment field – including plans to produce TV shows and movies, singing (she is recording a new album), acting, and writing (she is writing a new book) – with her recent trip to the Philippines, Paris has moved into real-estate to develop and promote luxury beach resorts which will be going worldwide. This is all in addition to her fashion and accessories brands sold in her own boutiques worldwide.

Paris emphasized during the interview that despite being deluged with so many offers over the years she has been extremely selective – only allowing product lines into her brand that she really believes in. She gave as an example her shoe line that she produces and markets with Joe Antebi.

Paris explained that for a woman to be successful in the business world she has to have true dedication, work very hard and be prepared to go at every single day with confidence.

Her family background was mentioned by Paris as a critical element in motivating her emphasis on business saying “it runs in my blood”– citing in particular two of America’s most famous businessmen, her great-grandfather (Conrad Hilton – founder of Hilton Hotels) and her grandfather (Barron Hilton) as examples of the standard of business success she expects to live up to.

By all measures Paris is living up to the family standards very well indeed.