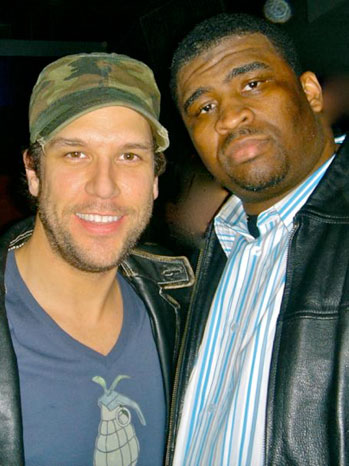 Patrice O’Neal, 41, died early Tuesday (11/29/11) and celebs that knew him are taking to Twitter and other forms of social media to pay their respects. Here are what a few people have said over the course of the day. Some of the notes are quite sincere and, well, others are are about as sincere as you can get in 140 characters or less . . . (Tweets have apparently replaced the kindness of sending the mourning family a card+flowers+sympathies).

Ricky Gervais: “@Exit98Guitars: I know you were a Patrice O’Neal fan. Sad news about his passing.” One of my favourite stand up comedians. So sad. RIP”

Bob Sagat: “Patrice O’Neal. So damn funny and so smart and such a giant heart.”

Dane Cook: along with a pic (shown above) he writes, “I started my career w/ Patrice O’Neal. He was 1 of the best ever. Fond memories of road gigs, late night eats & laughs.”

And, perhaps the most genuine note came from our good pal Charlie Sheen, who eloquently posted his thoughts/feelings on his WhoSay page:

The entertainment world, as well as the world at large, lost a brilliant man today. Patrice had that rare ‘light’ around him and inside of him. I only knew him for the few days leading up to the Roast. Yet I will forever be inspired by his nobility, his grace and his epic talent. My tears today are for the tremendous loss to his true friends and loving family.

The world of comedy will miss you, Mr. O’Neal!