People: How Sandra Bullock Got Her Groove Back – Photo 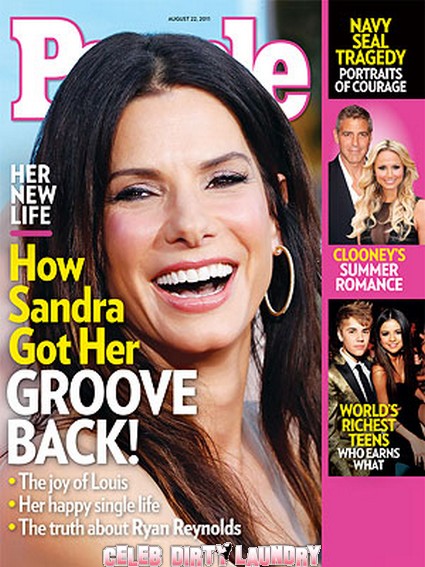 In the August 22nd issue of People Magazine the cover features Sandra Bullock, 47, and how she got her life back.  Sandra had a difficult time last year with the breakup with her husband Jesse James and the subsequent news that he had cheated on her with multiple women.    Since the one year anniversary of her divorce will be this month People tells us:  “How she got her new life, the joy of Louis, her happy single life and the truth about Ryan Reynolds.”

The magazine claims that becoming a mother to Louis is what got Sandra her groove back and got her back to acting.  “She was very keen to get back to work.   She threw herself in with her usual enthusiasm and energy, and she was very relaxed.”

Sandra should be celebrating that she is rid of Jesse James the guy is a total douche.  For more about Bullock’s life as a mom, the truth behind romance rumors pick up a copy of People magazine which hits the stands Friday!

Meanwhile, Sandra’s new movie Stephen Daldry’s Extremely Loud & Incredibly Close will hit theatres in early 2012.  The movie which also stars Tom Hanks and John Goodman is about a nine-year-old amateur inventor, jewelry designer, astrophysicist, tambourine player and pacifist, searches New York for the lock that matches a mysterious key left by his father when he was killed in the September 11 attacks.