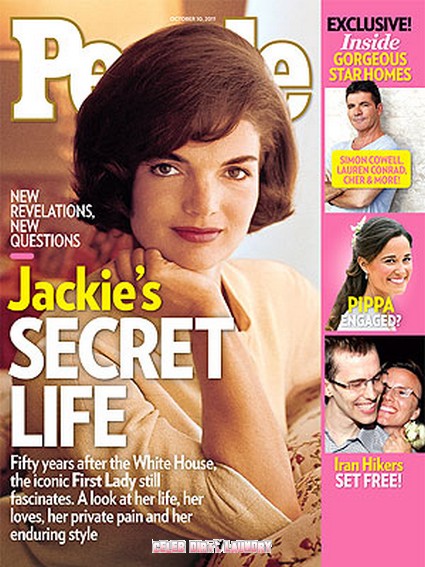 The October 10th issue of People Magazine features the cover story ‘Jackie Kennedy’s Secret Life’.  The magazine claims there are new revelations and new secrets about the former first lady Jackie Kennedy.  It goes on to claim that although not much is known about Jackie because she was very private People has their hands on some personal information about her private life, her pain and her loves.  Of course they are going to share it with us.

PEOPLE has learned: “intimate details about Kennedy’s life through interviews with her confidants. They come on the heels of recently released tapes – seven interviews a bereaved Jackie gave historian Arthur Schlesinger Jr., four months after she was widowed.   These interviews “were hard for her to do. But she felt it was important,” says her former Secret Security agent, Clint Hill.   Her friend John Perry Barlow also talks about what an accomplished flirt she was: “It was the best I’d ever seen because it was based on genuine interest.”

Her feminine wiles were even used to the “advantage of the American people,” adds Hill, who also discusses why Jackie married Aristotle Onassis, in 1968.

If you want to find out more information about Jackie, her fascinating life and the Kennedy tapes, pick up this week’s issue of People which is on newsstands Friday.