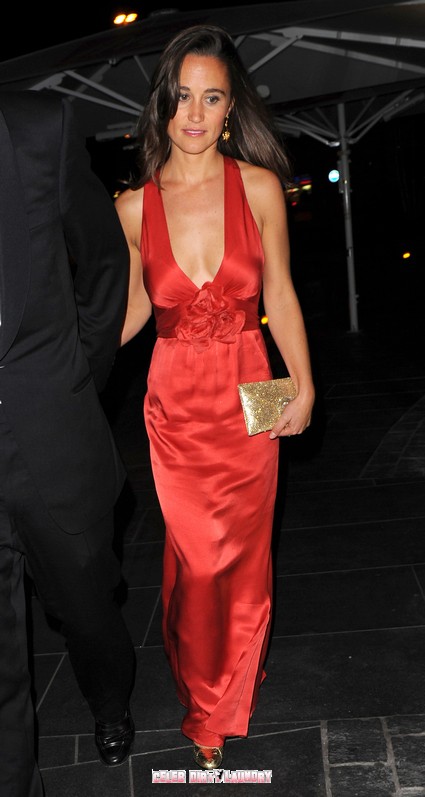 Duchess of Cambridge Kate Middleton‘s sister Pippa Middleton who is famous for all the attention her ‘royal  hotness’ behind’ got at the Royal wedding of her sister and Prince William attended The annual Boodles Boxing Ball charity event at the Park Plaza hotel yesterday October 1st, 2011.  Pippa attended the affair with  her boyfriend Alex Loudon and she wore a daringly low-cut red dress that showed a lot of cleavage in the plunging neckline.  Pippa is rumored to be moving in with Alex and/or getting engaged soon.

The ball raised money for the Starlight Children’s Foundation and the Lt Dougie Dalzell MC Memorial Trust which was set up in honour of a British soldier killed in Afghanistan.  Tables for the ball, organised by jewellers Boodles, cost approx. $3,000.

Several women wore red to the occasion including ex-Spice Girl Geri Halliwell and Prince William’s ex-girlfriend Jecca Craig.  Despite that they all wore similar dresses the women all seemed to get on fine at the event.

What do you think of Pippa’s red number?  If you ask me she should have worn a bra, breasts are not meant to be almost under your armpits? Just saying…..

Click on the thumbnails below to enlarge, enjoy the pictures!