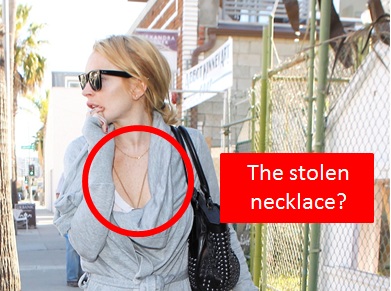 LAPD have engaged in an ongoing sting operation to catch Lindsay Lohan with the goods – the stolen goods that is.  Police were contacted immediately after a Venice jewelry store suspected that Lindsay Lohan had stolen a $2,500 necklace, but authorities waited to issue a search warrant until they’d seen Lindsay actually wearing it.

According to a source in law enforcement, “the jewelry store staff noticed that the necklace was missing soon after Lindsay left the store. The LAPD was notified that day and a police report was filed.”

The report was filed well before pictures of Lindsay wearing the necklace surfaced, which made for further evidence, as well as an investigative tool for police.

“It’s almost as if Lindsay wants to get caught,” the source said. “She is photographed everywhere she goes. Past allegations of Lindsay being accused of stealing are being looked at also, even though she has never been charged before for allegedly stealing.”

“Things aren’t looking good for Lindsay and she could be looking at state prison,” the source said, adding that even Lindsay’s skilled attorney Shawn Chapman Holley “won’t be able to get Lindsay out of this one if Lindsay is charged.”  “There is just too much evidence against Lindsay this time,” said the source.

“Investigators wanted to see if Lindsay was going to wear the necklace in question,” our source said. “The store owner worked with cops, and Lindsay was caught on camera several days ago wearing the necklace. It was after that picture was discovered that cops went to the judge to get the search warrant.  “Cops wanted to make sure the search warrant was approved, and they took the extra step of having a picture of Lindsay wearing the necklace almost ten days after the alleged theft.”

Father of the Year, Michael Lohan denied any wrongdoing on his daughter’s part.

“I’m not going to let people continue to distort things: Lindsay never stole a necklace.”  Michael added “People give Lindsay things all the time on consignment and when they need to be returned, they’re returned.  Bottom line, that’s it.”  If that is so then why did the store call the cops on Lindsay?

Let’s face it – Lindsay is a thief and Michael is a liar.