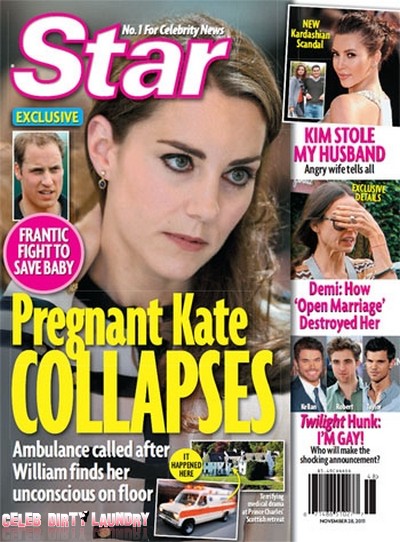 The current issue of Star Magazine features the cover story ‘Pregnant Kate Collapses.’  Magazines have been claiming for weeks now that Duchess of Cambridge Kate Middleton and her husband Prince William are expecting their first child. However, no confirmation or announcement has been made from the palace and the couple.  But that is not stopping the magazine from capitalizing on the expected announcement of a new Royal baby.  They go on to claim that Prince William found Kate on the floor unconscious and called an ambulance.

Last week we reported that Kate Middleton was behaving exactly like she would if she were pregnant, refusing to drink champagne and eat peanut paste.

It has been believed by royal watchers for quite some time that Kate and Prince William have been trying to produce an heir. Kate’s recent weight gain and private visits to doctors have increased speculation that a royal baby will be on the way soon.

Whether its a boy or girl that Kate is carrying we can’t be sure but we hope that if she is pregnant then she enjoys a safe and healthy time of it.