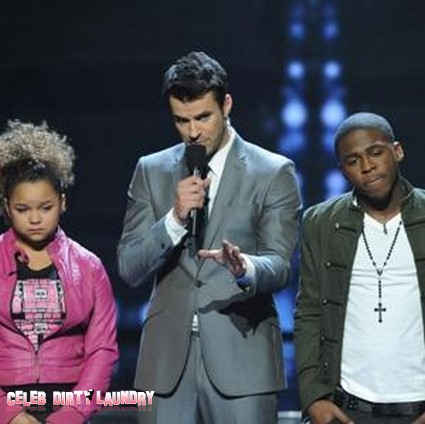 Marcus Canty almost caved under the pressure of last week’s apocalyptic face off with Rachel Crow and came within a hair’s breadth of quitting The X Factor USA!

With Paula Abdul’s help, cowardly judge Nicole Scherzinger pretended that she couldn’t make a choice, so she sent the decision to deadlock and it was up to the viewers’ votes.

In what turned into a major scandal, Rachel had the lowest vote and was sent home.   When she registered that fact and realized that she was done, she collapsed to her knees bawling and started calling out for her mentor, Simon Cowell.   It was a disgusting and horrific display and poor Marcus was upset.

“Marcus was crying backstage,” an on-set source told The New York Post. “It took him a few hours to pull himself together. He felt so bad, his first reaction was to quit. I’ve got plenty of negative backlash,” he tells The Post. “People saying, ‘Marcus go home.’ I’ve got called names.”

Marcus, 20, admits that he was devastated to be put up against Rachel, 13, and Drew Ryniewicz, 14, the week before. “I knew [people] would say, ‘Marcus the baby-killer,’ and I got the little girls crying,” he says. “But people should be prepared for a heartbreak, cause everybody can’t win… If people wanted Rachel to go through, they should have voted for her.”

But Marcus says that he has recovered and has no plans on resigning. “I am a cat with nine lives. They try to get rid of me, but they can’t,” he tells The Post.
Go for it Marcus – if Crow was better than you she’d be there and you’d be gone.  Make sure to come back tonight when we will be live blogging the show with up-to-the-minute results!