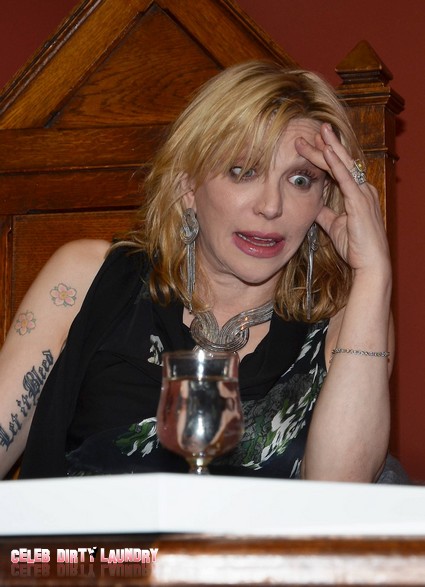 Imagine that Courtney Love‘s own daughter, Frances Bean Cobain, refuses to have any contact with her – but Courtney remains undeterred and has appointed herself Lindsay Lohan‘s sobriety coach.  Just being in the same room as Courtney Love would be enough to send anyone scrambling for drugs and booze.

The Hole singer – widow of Nirvana frontman Kurt Cobain – has battled drinking and drug addiction in the past and somehow believes this qualifies her to help Lindsay. Lindsay has already been in rehab 5 times, to no avail, so we suppose that Courtney’s intervention can’t hurt… much.

Courtney said: “I’ve taken up Lohan because nobody else will. [She’s] further down the line than I was, because there was no [gossip websites like] TMZ then.”

This is not the first time Courtney has ‘helped’ 25-year-old Lindsay sober up – of course her past help was obviously useless.

Courtney recalled to Details magazine: “I went up to Lindsay’s room one time and there was a show on called ‘101 Celebrity Oops’ and I am like every other one, you know – boobs out, legs everywhere, throwing s**t at Madonna, you know, whatever. I ‘m like ‘Lindsay, look! Drugs are bad!'”