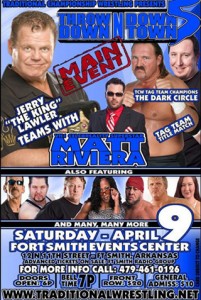 This past February Riviera and Lawler squared off against each other, but now they join together for a common mission; beat the current tag team champions “The Dark Circle” and crown themselves NEW Tag Team Champions.

If Lawler and Riviera are victorious, this will be the first time in the history of Traditional Championship Wrestling that a wrestling Legend will co-hold the Tag Team title with a current wrestling Superstar.

Riviera, is best known for his appearance on VH1’s “Megan Wants a Millionaire” and various movie roles.  Riviera will star in an MMA movie, The Foreigner, to be filmed in Thailand.

Both Riviera and Lawler are no strangers to holding championships.  In his 40 year career, Lawler has held a championship belt more than 163 times.  Riviera before his 25th birthday held a Tag Team Championship and a Heavyweight Championship title.

Also scheduled for the event is Bobby Eaton, Jazz and more

This is one event wrestling fans everywhere won’t want to miss.

For more information about Throwdown in Downtown V, visit http://traditionalwrestling.net