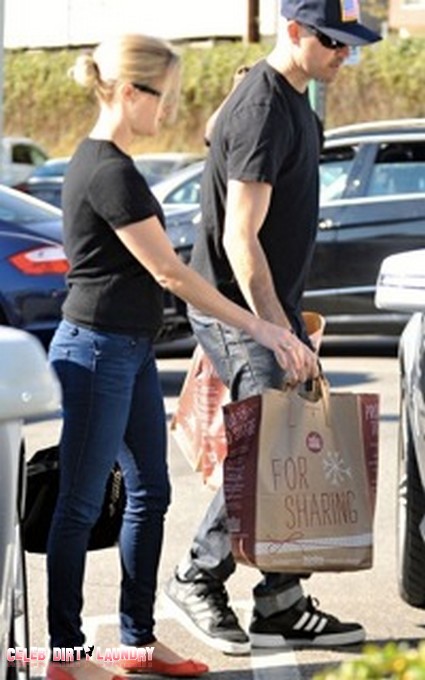 Wait a second—stars brave the torture of the grocery store to do their own shopping like real people? It’s true! “Legally Blonde” star and Oscar Winner, Reese Witherspoon was out Saturday picking up a few things for their Christmas feast with hubby Jim Toth.

Dressed similarly in black tops and jeans, the newlywed couple was seen carting massive bags from Whole Foods in Brentwood, California to their black SUV. Looking very much like the yummy mommy she is, 35-year old Witherspoon set herself apart with a cute bun in her hair and a festive pop of colour with red flats.

Married since March, this is the couples’ first Christmas as smug married folks. Friends of the couple have said that Toth is very good with Witherspoon’s kids (with actor Ryan Phillipe) so it looks like there will be plenty of cheer around their house this year.

In related, but un-Christmassy news, Witherspoon has recently signed on to star in Atom Egoyan’s film based on Mara Leveritt’s 2003 book about the Memphis Three. Witherspoon must be campaigning for another Oscar as she’s signed on to play the challenging role of Pam Hobbs, the mothers of one the three teenage boys convicted of murdering three children.

The Memphis Three made headlines again this year when they were released from prison after serving 18 years. New DNA evidence surfaced that brought into question the guilt of the three teens and the trials in which they were found guilty.