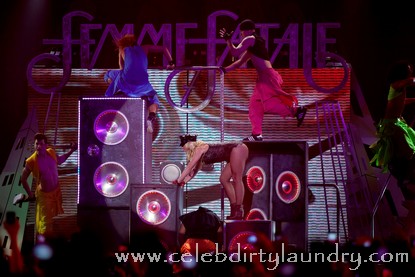 Let me introduce our New Guest Blogger Justin Taroli.  Justin is a graduate of King’s College in Pennsylvania with a degree in Communications.   He owns and writes for ListsAndGrades.  Justin will be guest posting for Celeb Dirty Laundry on a weekly basis – so stay tuned!!

Britney Spears – Femme Fatale – Over a decade into her career, and we’re getting something sincerely amazing from Spears. Britney’s latest pinnacle of a CD answers the question: Is it really possible to make great music on your seventh studio record? The answer is an astounding yes. Yes, you absolutely can, and Britney has proven that with Femme Fatale.

Comparisons to Madonna have been following Spears since Baby One More Time, and while those comparisons are very much justified, they’ve never been more apparent than right now. We’ve wondered if Britney could make a great CD when she finally got her life back on track. She has, and it shows. Are we over-stating ourselves a bit? Perhaps, but the truth is, it’s not like Britney ever gave us a bad record anyway. Her collection seems to go like this: there’s the pre Blackout, and there’s post Blackout. And we should say, Blackout was probably Spears’ most critically acclaimed CD, which is interesting. One, because it came at a time in her life when she was heavy on the train-wreck and light on the music. And two, because we find that to probably be her worst venture.

Her long time collaborators Max Martin and Dr Luke abound on Femme Fatale, and she has literally never sounded better. She starts the CD with the etherial dance anthem “Til The World Ends,” which has not made us want to dance more than any Spears song has before, ever. Yes, we mean that. It’s the song we’ve always wanted her to record. Oddly enough, it was written by Ke$ha, who probably should have kept it for herself. When her lead off single “Hold It Against Me” came out, we gave is a B, a so-so review. But after listening to the record in order, the song fits perfectly, and works much better on multiple listens.

“How I Roll” is a bubbly playful song in which she sings talks “You can be my fuck tonight. We can tear it up tonight.” We just had to mention that lyric, for obvious reasons.

It’s rare for a cd to have absolutely no filler. Every song is the perfect mix of classic Britney with a Blackout/Circus vibe. It’s almost like, for the first time, Britney knows exactly what she wanted her CD to be, and everyone who helped her along the way, pulled out all the stops and gave Spears their absolute best. Femme Fatale truly just might be a masterpiece, and thankfully so, because Britney really needed to prove herself as the reigning princess of pop. Born This Way seriously needs to be worried.

Most tracks are fast, like the wonderful “Trouble For Me,” where she sings “Black jack, whiskey straight. Every day changes your life.” Sounds like a club anthem on face value, and it probably is, but the fact that those lyrics are coming out of Britney’s mouth and into our ears is just charming. One or two of the songs are in the slow field. The closest thing we get to a ballad is the song “Criminal,” which is just gorgeous. Is she singing about herself when she says “Mama I’m in love with a criminal. And this kind of love isn’t rational?” We don’t know, and frankly, we don’t care. The song is just great, and there’s a moment in there that is just superb, and the best minute on the record. The best thing about this song? She sounds so much like herself.

To break it down, if you should take anything away from this, Femme Fatale is honestly the penultimate career achievement for Britney. It’s a little bit of Robyn and Kylie, better than Gaga’s latest single, and 100 percent Spears. In a world with so much nonsense, we would love to pretend as though there isn’t a competition right now between Britney and Gaga, but there obviously is, at least in our world. Yes, there’s obviously room for both, and if we’re arguing talent, clearly Gaga is the winner.

But something has to be said that this far into her career, Britney is still on top. Think about when Spears came out with BOMT. Her competition was Christina Aguilera, Jessica Simpson and Mandy Moore. That sentence almost sounds laughable. Britney is still here, giving us the best music she’s ever given. Femme Fatale will be on repeat for two months until Born This Way comes out. Then it’s on! Femme Fatale vs. Born This Way as pop record of the year. Gaga should be shaking in her stilettos, because Femme Fatale is pop perfection.

Femme Fatale has sparked our love for Britney all over again. We’re excited for her again. It’s taken us back to our In The Zone days when Britney could do no wrong, and more than anything, we love it for that.

Standout Tracks: Til The World Ends, Criminal, Trouble For Me, Inside Out, I Wanna Go