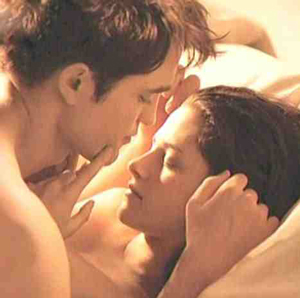 Robert Pattinson has gone on record as being livid that photos of his ‘Breaking Dawn’ sex scene with Kristen Stewart were leaked on the internet.  He suggested that fans of the vampire series  “Find out who these little sh–s are and just hack into their computers and destroy them.”

His complaint was not only that the images represented raw footage that might not be seen in the final cut, but that they spoiled a bit of the surprise that director Bill Condon and the rest of the “Twilight” gang have in store for audiences when the film hits theaters in November.   And, as RPattz explained, they’ve got some special stuff planned.

“It’s kind of incredible,” he said. “I saw a prelim of it. [Bill] has really, really good ideas for it.”   The tricky thing, of course, is to shoot a sex scene that lives up to the expectations of readers of Stephenie Meyer’s book yet adheres to the restrictions of the MPAA’s rating system.  “We had some really interesting ideas about it,” Pattinson explained.  “It’s kind of interesting, as well, having to do it in the context of PG-13. “You can’t do blatant,” he added with a laugh. “That’s all been done in other stuff anyway, like saying, ‘You just do it really, really fast!’ ”

Rob has experience with this: his upcoming role in ‘Bel Ami,’ a romantic drama co-starring Uma Thurman, features a whole lot of blatant sexuality.  How blatant?  “Lot of my crack in it!” he laughed. “I think there’s quite a lot of nudity.”