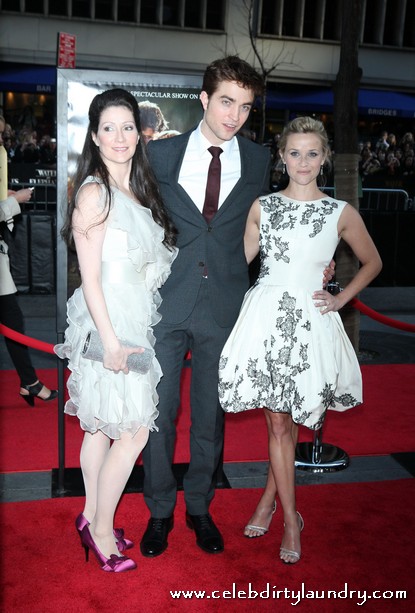 Sara Gruen, Robert Pattinson and Reese Witherspoon  at the world premiere of ‘Water For Elephants’ which was held at  The Ziegfeld Theatre – in New York City April 17th, 2011.   Along with Sara, Robert and Reese the other stars of director Francis Lawrence’s highly anticipated period drama, adapted from Sara Gruen’s best-selling book walked the red carpet.  Robert Pattinson looked hot in a a suit and tie and even took time to sign autographs and take pictures with fans.   Robert must be tired since he flew to NYC from Vancouver, where he only just wrapped Breaking Dawn filming.  The only thing that may have disappointed fans is that Kristen Stewart was not on the Red Carpet.

Water for Elephants is about Jacob a veterinary student (Robert Pattinson) who abandons his studies after his parents are killed and joins a traveling circus as their vet.   It is there that he meets Marlena (Reese Witherspoon), the beautiful young star of the equestrian act, who is married to August, the charismatic but twisted animal trainer. He also meets Rosie, an elephant who seems untrainable until he discovers a way to reach her.  The movie hits theatres in the US April 22nd, 2011.   Will you be going to see it?