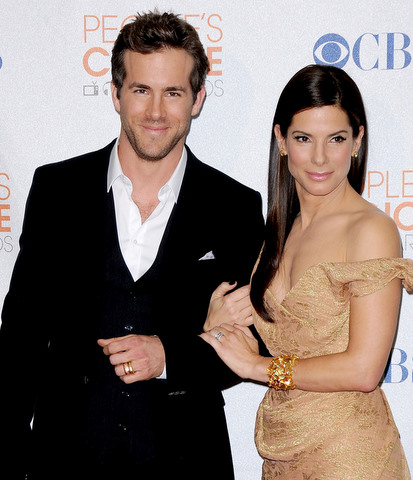 Sandra Bullock is reportedly set to adopt a baby with Ryan Reynolds. Adoption makes good sense – apart from sparing 48-year-old Sandra the stress and strain of pregnancy it allows an orphan, or at least an unwanted child, to have a great home and loving parents.

The Oscar-winning actress is already mother to 19-month-old son Louis who she adopted as a single mother last year following the breakdown of her marriage to Jesse James.

Sources say Bullock and Reynolds — her costar in hit flick The Proposal – have been spending an increasing amount of time in each other’s company leading to speculation that they are going to build a family together.

“Sandra is blown away with what a great stand-in dad Ryan has become to Louis and how he treats him as his own,” a source said  “There is no way Sandy would allow Ryan to bond so tightly with Louis if she didn’t see a future with him. They are a great team. Sandy and Ryan were best friends and love blossomed from a solid foundation.  They share the same family values so they’re powering forward.”

If all of the world was as big on adoption as Hollywood there would be a shortage of ophans. Sadly, most of us are neither wealthy enough nor truly interested in adopting and so there will remain too many unwanted little young people without homes and parents.