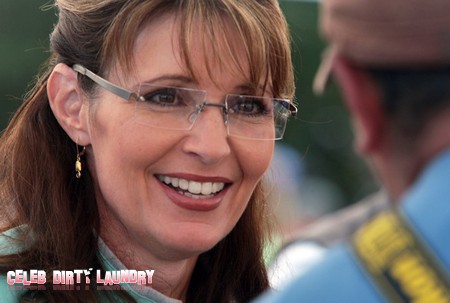 Sarah Palin is the undisputed the leader of her family, but with authority comes responsibility – and according to the other Palins Sarah is not taking care of business. By business we mean making sure that the rest of her crew get their own reality TV shows. Bristol who desperately craves a celeb career – she already had the cosmetic surgery and written the autobiography – is enraged with her mom for not pushing her prospective reality show on the Bio channel and her dad, Todd, agrees.

According to sources reporting to the National Enquirer: ‘Sarah is getting flak from both Todd and from Bristol.  Todd was hopeful he could get a show about snowmobile racing but this was shot down by both Discovery Communications and the A&E Network. You mean Americans are not clamouring to watch Sarah’s dud of a husband race snowmobiles all over the frozen north?

‘To Sarah’s credit, she helped pitch Todd’s show,’ said the insider, adding, ‘But he’s still furious. He thinks she didn’t work hard enough because it wasn’t centered around her.  Bristol is strug­gling to reinvent her scrapped Bio channel reality show, this time under a Kardashian-style format featuring her boyfriend Gino Paoletti and her 17-year-old sister Willow.

‘And Bristol’s upset because Sarah wants to stay out of ne­gotiations for her show. Sarah isn’t thrilled with Willow being involved. But Bristol believes the show will be more marketable with Willow – that they can be the next Kardashian sisters.’

Sarah an­nounced in October that she wasn’t going to run for presi­dent, but needing a boost in exposure she suggested on December 19 she might in fact run.

Thought is that this is merely a pathetic ploy on her part to bring back her own TLC reality show ‘Sarah Palin’s Alaska.’  ‘Sarah looks like she’s back in the very profitable business of will she? or won’t she? run for president,’ observed another insider.  ‘She doesn’t have any serious plans to run, but she’ll keep the public guessing for as long as she can or at least as long as she can make money off of it.’

Whatever you might think of John McCain you have to resent him for unleashing Sarah Palin and her family upon us – they manage to make the Kardashians look not so bad. Vote in our poll – which family is more disgusting the Pallins or the Kardashian/Jenners?