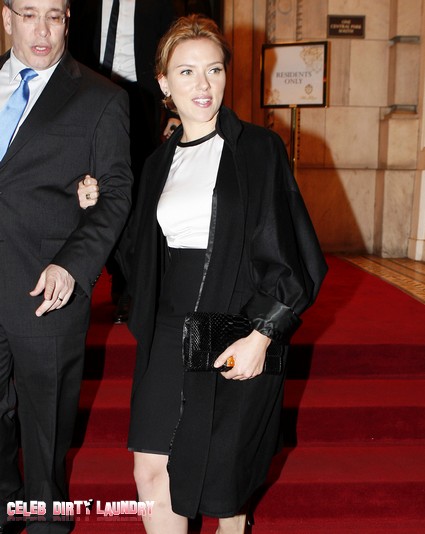 Scarlett Johansson says that she hates the “discipline” she requires to stay Hollywood slim – but she does like stripping off for the camera, doesn’t she? Guess all that hard work she suffers through to stay looking sharp is worth it. She rarely misses an opportunity to show off that body. Scarlett bitched and moaned – she even went to the FBI – when some nude photos she snapped of herself were allegedly hacked from her cell phone and displayed on the Internet. But just weeks later the exhibitionist decided to pose topless for all to see in an interview with ‘Interview’ magazine.

The 27-year-old ScarJo works hard to maintain a slim physique, particularly for the tight-fitting catsuits she has to wear in her role as Black Widow in the forthcoming ‘Avengers’ movie, but does not enjoy the amount of time she has to spend in the gym so as not to worry too much about what she eats.

She said: “I hate having to be so disciplined, and I don’t like to be told to do anything. Not that everyone’s telling me what to do – they just expect me to arrive onset and not be fat.”

“I exercise and eat well. I do it so I can indulge every now and then. I can have half a bottle of wine and not sit around thinking, oh my God, all those calories! However, when you’re working and getting up at 4am to train for three hours every day, drinking isn’t what you necessarily want to do. The discipline it takes to keep to that schedule sucks.”

As well as disliking her intense exercise regime, Scarlett is not a fan of having to have red hair for the role because it is such a struggle to maintain.

She added in an interview with Australia’s Daily Telegraph newspaper: “I’m done with red hair. It’s so much upkeep. I don’t want to be in the salon any more. I hate sitting there, the smell, the cape.”

Poor Scarlett – all that she must endure just to be a star – why doesn’t she make the leap to straight pornography like Lindsay Lohan?