Shia LaBeouf Is Cracking Up… Again 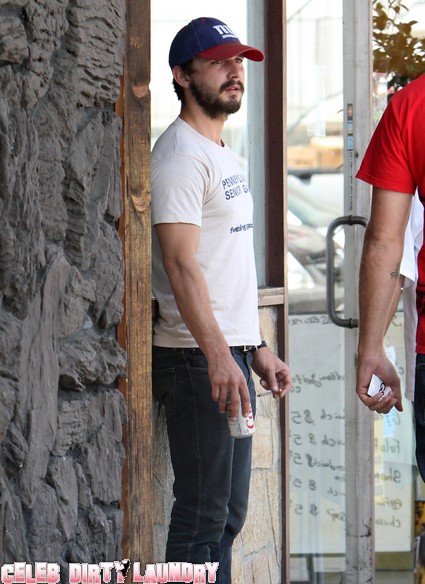 Shia LaBeouf might be entering another period of bad behavior.  Onlookers at an LA party were concerned for Shia last night after the actor exhibited some very strange behavior.

The Transformers star had what one witness tells Life & Style seemed to be “a public meltdown,” spitting water over his date and rocker Marilyn Manson before charging through the crowd to the exit.

The witness said: “Shia picked up a water bottle and shot a mouthful of water all over his seated date’s legs.”

“Then he put more water in his mouth and started spitting it all over his tablemates, including Marilyn Manson. He seemed wasted.”

But according to the witness, neither his date, his friends nor Marilyn could calm Shia down even after Marilyn offered a fist bump, as if to say everything was fine.

“People started taking their seats in front of the stage at the event, but all of a sudden Shia started shouting at his date and getting visibly angry,” the eyewitness said. Then he headed for the door. “He lunged through the very thick seated crowd, and the crowd pleaded with him and encouraged him to sit down. They tried to hold him back – but he kept struggling through.”

“Shia had to climb over people and tear himself out of the grasp of various strangers who were trying to keep him from going crazy,” the eyewitness says. “His date panicked and ran out after him. Marilyn looked shocked and annoyed but stayed seated. Shia and the girl did not return.”

“It was so insane – he just had a total meltdown right in front of everyone, it was completely out of control. He was so angry and physical. He was determined to get out of there.”

Looks like Shia better get a hold of himself before the law is forced to.