Sienna Miller and Tom Sturridge Enjoy The French Open Together 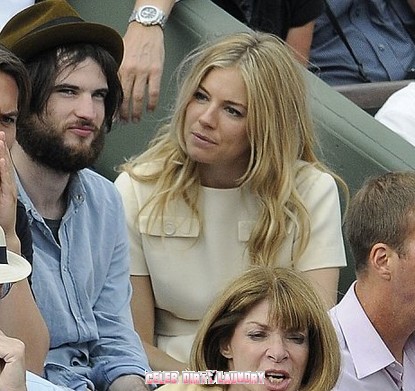 The newly dating couple only went public with their relationship last month, but judging from the clips shown yesterday of the pair, things seem to be going pretty darn good.

Sienna Miller and Tom Sturridge, both in the acting biz (uh oh, not sure if this is a good or a bad thing), sat side by side while watching the French Open in Paris yesterday.

Tom, 25, and Sienna, 29, stayed close and snuggly and looked like two peas in a pod.  Although Tom did have his scruff look going on, I kind of liked it I must admit.  In fact, I really like him in general.  Not because he so happens to be Robert Pattinson’s best friend (of course not), but his career seems to be on the rise with successful film roles in On the Road, and The Boat That Rocked.  And he’s not too sore on the eyes ladies.

While Tom has previously been linked to actress Cary Mulligan, Sienna recently (and finally) split from actor Jude Law back in February – and she seemed happy to be moving on!  She was caught affectionately giggling as the actor shared kisses with her…how unbelievably cute right?