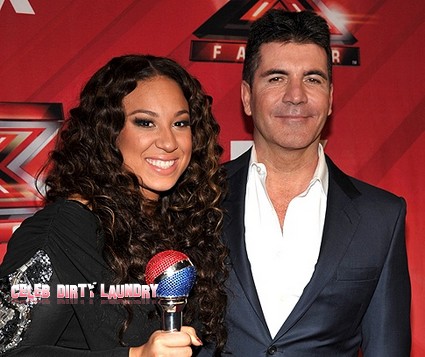 Simon Cowell can claim success as his protege, Melanie Amaro, was crowned the first winner of the X Factor USA – but although Simon is convinced that Melanie that will be a huge star, he said that she was “not the easiest person to work with.”

Melanie is a 19-year-old Sunrise, Florida native who beat runner-up, Josh Krajcik, to take home the $5 million contract with Simon’s record label SyCo as well as a role in a Pepsi Superbowl TV commercial.  In retrospect Simon was glad that he changed his mind about sending her home at the Judges’ Houses stage.

Simon said:  “She’s a little star. I remember when I walked into her house, she’s literally watching herself on YouTube. I knock on her door. She did a double take when she saw me. I explained why I was there. And then it was like a marriage proposal. I said to her, ‘I’ve made a mistake. I admit it. I’m going to give you a second chance.’ And I stood there like a lemon for 30 seconds while she stared at me, and then quietly said, ‘Yes, I’ll do it.’ Now I’m seeing her behind me, she’s got the confidence. And I’m proud of the fact the show found her.”

“I was probably looking for a bit of balance. To be honest with you, I can’t answer this question properly. All I can say is, ‘I royally screwed up.’ But this time at least I have a chance to rectify it.”

Upon hearing she had been crowned the winner, Melanie – who was predicted to win by the four judges, and our poll on Celeb Dirty Laundry, after an amazing performance of Beyonce’s ‘Listen’ on Wednesday, said: “I want to say America, thank you for giving this girl an opportunity.”

Although Simon believes Melanie will be a huge star, he admitted she was “not the easiest person to work with.”

He said: “She’s willing to work hard. I think she’s someone who can sell records all over the world, which is important, and I think she’s got longevity. [The prize] goes against earnings, but she’s guaranteed the $5 million. She’s now a rich girl.”

“She’s got that star ability, and she’s tough. She was not the easiest person to work with. If she didn’t like something, she’d tell you. But I like that. I like that from an artist. You know, she’s got guts. She’s got steel. And right up until the last second, she was always concerned about her performance, and then the light switch went on every time.”