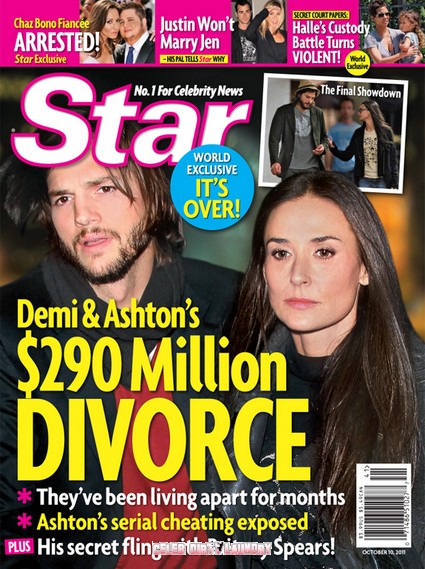 The October 10th issue of Star Magazine features the cover story ‘Demi Moore & Ashton Kutcher’s $290 Million Divorce’  The magazine claims to have explosive information on the breakup.  They claim the couple have lived apart for months, Ashton is cheating and he has had a fling with Britney Spears.  Now that is random Britney Spears?? She has been with Justin Trawick for a while now and seems happy.

This is not the first time rumors of Ashton cheating have leaked.  Yesterday we reported that Two And A Half Men actor Ashton was hooking up with a chick named Sara Leal, after telling her that he and wife Demi Moore were separated.

The magazine decided to give the Angelina, Brad and Jennifer story a break this week and pick on Demi and Ashton.  No surprise with Ashton in the news for his new series Too and a Half Men where he replaced Charlie Sheen it is a good time to write about Ashton.  People are talking about him and they figure that will sell magazines!

What do you think is Ashton having trouble keeping it in his pants?  Is this a case of where there is smoke there is fire?   Let us know your thoughts, sound out in the comments below!