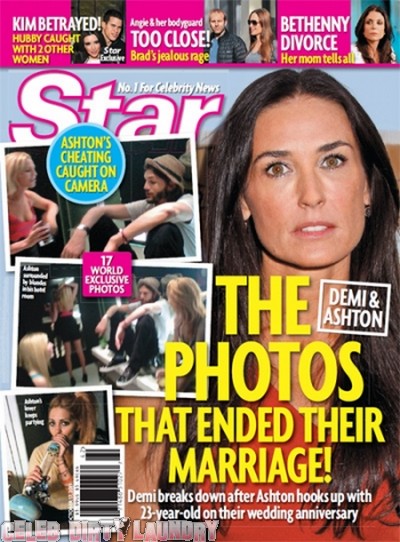 Last week, Star magazine was the first to make the revelation that Ashton Kutcher was cheating on his wife, Demi Moore. They released the kraken (not Khloe Kardashian) by saying that Ashton and Demi were going through a $290 million divorce!

Star has seventeen photos of Ashton’s shenanigans, and this is said to be proof that their marriage is officially over. Ashton’s cheating was “caught on camera” as he’s seen with several girls and was rumored to be having a fling with 23-year-old Sara Leal on his and Demi’s sixth wedding anniversary.

Also in this issue is Kim Kardashian’s betrayal by new husband Kris Humphries. They are claiming that Kris was caught with two other women. Everybody is cheating, aren’t they?!?

According to the top section, Brad Pitt is in a jealous rage over Angelina Jolie getting too close to one of her bodyguards. Also, Bethenny Frankel is getting a divorce!

They are really pushing this Demi and Ashton divorce, aren’t they? I think it says a lot that so much evidence is coming out that he’s a cheating scumbag and they haven’t addressed the rumors at all. Shouldn’t they say one way or another what’s going on?