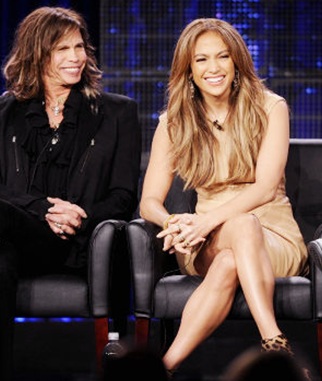 American idol  launched tonight for its 10th season.    With the loss of Paula Abdul, Simon Cowell and Ellen Desgeneres many wondered if they show could survive.    The show started with Randy Jackson sitting in Simon’s seat, Jennifer Lopez sitting in Ellen DeGeneres/Kara DioGuardi/Paula Abdul seat and Steven Tyler sitting on the left.

The first hour of the show concentrated more on introducing us to the judges than the contestants.  You can already see they are trying to line Jennifer Lopez up as the ‘nice person.’  She cannot say NO, I don’t buy it she comes off phoney and insincere. With comments to Randy like “how have you done this for ten years, it is so hard to say no?”   She spent a good part of the evening whining.   Jennifer would have us believe that it is to difficult for her to reject contestants.

Randy is Randy Jackson not overly interesting.  He had said before the season started he would be the ‘mean’ judge this season – well he failed it  – he did try.  He is just not Simon.

The bright light of the evening was Steven Tyler.  The rock legend was kind funny, kinda nuts but we loved him!   From his first comment to the first contestant  he put through “Let her in the door, put water on the flower, ’cause I think it’s gonna grow.” to singing with the contestants Tyler proved to be a successful addition to the American Idol team and a  reason to tune back in again.

We will find out over the next couple of weeks if American Idol can survive without Simon and his blunt criticism.  Will fans be happy with the new softer and kinder judges?  What did you think of the show?