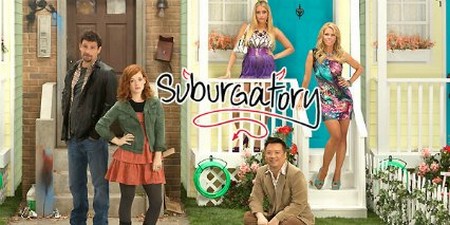 Tonight is an all new episode of the ABC comedy Suburgatory and we’ll be covering the show live!  From the official synopsis of tonight’s episode, titled, Don’t Call Me Shirley:   The theft of Sheila’s Shirley Temple doll collection sparks fears of a neighborhood crime wave, but Tessa’s elation at such a  gritty development in the suburbs is tempered when Dallas and Dalia are so scared of being robbed that they move into her house.

The show opens with Tessa and George eating breakfast at the table.   Tessa hears sirens and goes outside to see what’s going on.  Apparently, someone has stolen Sheila’s Shirley Temple doll collection.  Lisa is super excited about the doll theft, calling it the most exciting thing that’s happened around there.

George is having lunch with Noah, talking about the doll theft.  Noah tells George that he should be capitalizing on the theft.  He says he’s an architect and Noah tells him about panic rooms.  They are joined by Dallas, who wants a panic room.  She’s not having lunch because she doesn’t eat in public.

Check out the rest of the official recap at our sister site, Tragicomical!