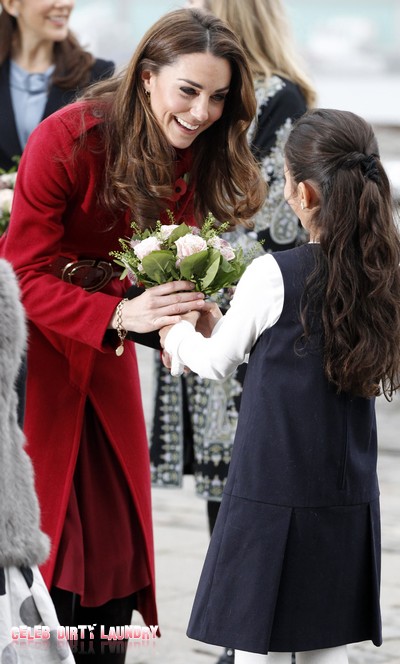 Probably imagining pictures of Sleeping Beauty and Cinderella transformed, it seems that some elementary school pupils were disappointed and didn’t think Kate Middleton looked “like a princess” when she visited their classroom. Before her next visit with young children Kate should consult a Hollywood costume outlet – so she won’t disappoint and will look like ‘Glinda the Good Witch Of The North‘ in ‘The Wizard of Oz.’

The Duchess of Cambridge went to find out more about The Art Room – an art therapy charity she is thinking of representing – this week, meeting at the primary school where their London branch is based.

The casually dressed royal was taken on a tour to see the charity’s work at the Robert Blair Primary School, before meeting pupils and posing for a picture, but some seemed confused by her wearing a jumper and jeans.

“They were so excited and were all told to wait in the car park to see her. When she came out of The Art Room after the visit, she posed for a picture and waved at the children.”

“Some of the little ones were very confused. They were saying things like, ‘She doesn’t look like a Princess. Where’s her dress?’ They didn’t believe it was the Princess they had seen on the television.”

The Art Room works with children aged between five to 16 who are disruptive or have learning difficulties and aims to “increase self-esteem, self-confidence and independence through art.”

Confirming the visit, a spokesperson for Catherine said: “It was one of a number of meetings, part of the Duchess getting to know the charitable sector. The Art Room wrote to her and caught her eye. She went to find out more about their work.”