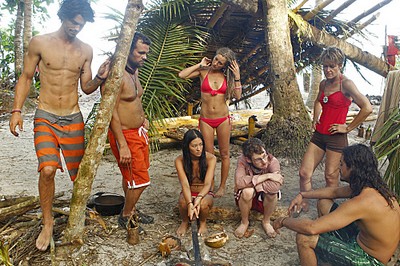 Tonight is the 4th episode of Survivor: South Pacific Savaii and Upolu  tribes will face off again for the chance at immunity and a step closer to winning the million dollar prize.  Last week Papa Bear was sent home.  If you missed the show read our official recap here!

Episode Synopsis: One castaway is brought to tears when confronted with his past during an emotional tribal council, and another turns on his alliance and teams up with an unlikely tribe member. Meanwhile on Redemption Island, the second castaway is sent home.

Ozzy and Elyse are in a hammock and Jim is wondering if they are closer than people think.  Jim is nervous about it and thinks they have to vote Elise out to shake Ozzy up.  He tries to convince Cochran that it is a good idea to get rid of Elyse and Cochran agrees.

Cochran is not really fooled by Jim but he thinks if Elyse gets voted out that will give him another week on Survivor and he wants to stay.

Brandon is feeling that everyday is a struggle on Survivor somehow he is gotten the idea in his head he has to be a good person on the show, he forgets he is playing a game.  He also does not want to be thought of as the same person as his Uncle Russell.  Mikayla thinks that all Brandon’s apologizing makes him look like a fool.   He is admitting that he has lied to people, not a smart way to play the game.  He apologizes to Edna and admits she is not part of the alliance like she thinks she is and is actually going to be the next to go.  Edna is upset.

They get tree mail and there are bathing suits for everyone.  They have to send 2 volunteers to the Redemption Island competition.  Jim & Cochran go and Brandon & Edna go.

Edna thinks her age is a factor at 40.  She thinks she has to show the team what she can do.  She feels it is crucial to her staying in the game.   Jim thinks it is good strategy to make the other team think they are week; Jim just wants to talk strategy.  When Jim and Cochran leave for Redemption Island Ozzy tells people he does not want to talk strategy but Dawn thinks he is lying and is always strategizing.

Redemption Island:  Christine VS Papa Bear.  Brandon apologizes to Christine about how he handled the first couple of weeks and she accepts it but says she does not necessarily believe him.  The competition is close but Christine wins the competition and Papa Bear is going home.  This is the second duel Christine has won.

Edna thinks she has to be more cautious now after what Brandon told her.  She knows she cannot win in a physical game but the social game she might.  However, she does not shut up and her team members are getting fed up.   Stacey thinks she talks too much.  Edna is getting on everyone’s nerves but she is not shutting up she is just blabbing her head off.  Her little laugh is driving Mikayla and Stacey crazy

Cochran and Dawn are talking about Ozzy.  Dawn is annoyed because she thinks Ozzy is not being straightforward and actually has a strategy.  Cochran and Jim have made a close alliance and they want to vote out Elyse but they don’t think they have the votes. However, they think if they can get rid of Elyse it will surprise a lot of people.

Immunity Challenge.  They have to hold a pole, they have to hold it and weight will be added the other team decides who gets the weight.  The winning tribe gets a rooster, a hen, a clue and immunity.  The challenge is down to Brandon, Jim, Dawn and Stacey.  The guys drop leaving the two women to fight it out.  Dawn wins immunity for Savaii.

Edna is trying to find out is she should prepare to go home.  Stacey is also nervous and is asking coach if she is going home and he tells her it is her or Edna.  She is trying to convince Coach it is smarter to keep her.

Coach is starting to worry about Brandon.  He cannot let anyone mess up his game.

Tribal Council:  Mikayla says she is annoyed that Brandon is Russell’s nephew.  Even though Brandon is nice, blood is blood and she is frightened at the end he will turn into Russell.  Brandon is upset and is sobbing, he says at the end of the day he wants to be someone God thinks highly off.  He wants to reclaim the family in a positive light.

Forth person voted out of Survivor South Pacific Stacey!

Her parting words everything was a lie, I will be back!!!