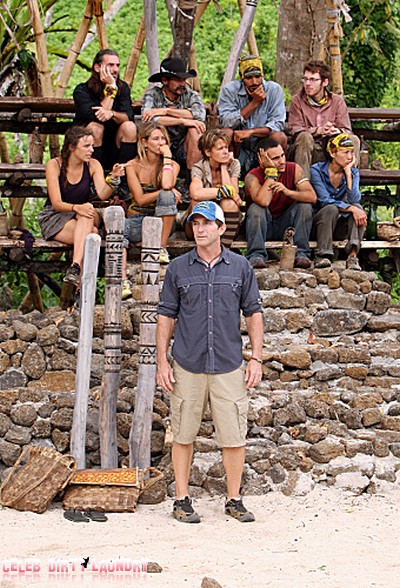 Tonight is the tenth episode of Survivor: South Pacific and it is called ‘Running The Show.’  Stay tuned as we cover the show with up-to-the-minute details.  On last week’s episode Jim was voted out and headed to Redemption Island.  The stupidity of the remaining cast-mates amazes me.  They are totally taken in by Cochran, I would not be surprised if he made it to the final 4.  If you missed last week’s episode you can read our official recap here!

On this week’s episode Ozzy Lusth, Jim Rice and Keith Tollefson are now on Redemption Island.  The three battle it out and the winner stays, both losers go home for good.   Who do you hope wins the three-way duel?

Episode Synopsis: Paranoia among tribemates threatens to break a once-impenetrable alliance, and castaways are shocked at Tribal Council with the announcement of another double elimination. Meanwhile, on Redemption Island, a castaway makes a bold threat to his former tribemates during the duel challenge, and two castaways are sent home, on SURVIVOR: SOUTH PACIFIC, Wednesday, Nov. 16 (8:00-9:00 PM, ET/PT) on the CBS Television Network.

Which two players do you think will be voted off at the next Tribal Council?   I know who one of my votes would be for, Cochran.  I cannot stand him.   I cannot wait for the show :-)  I am crossing my fingers that the tribe wakes up and sees Cochran for who he is.  What do you think about Cochran?  Sound out in the comments below!

Tonight’s episode:  Jim arrives on Redemption Island.  He tells Ozzy all about what happened at the immunity challenge.  Back with the tribe Coach tells the tribe members that Jim is a dangerous person and they have to watch him even though he has gone to Redemption Island.

Whitney is confused how everyone is listening to Coach they are suppose to be smart people and it is obvious he is trying to manipulate people.

Coach tells Cochran he is a little bit worried about Albert.  He is afraid he is going to get blindsided.  Cochran asks if Coach will try to gt rid of him and Coach assures him he will try his best to keep him.  Coach is worried he thinks something fishy is up.

Redemption Island:  The whole tribe is here to witness the duel.    With the top of their hand they have to whole two boards and balance a blank.  The Ozzy, Keith and Jim have one chance to go back in the game.  The other two will leave.  Jim dropped out and he is the first member of the jury.  Keith is the second member of the jury.  Ozzy wins immunity.

Ozzy is happy to be on Redemption Island all alone, he has interesting reefs and plenty of food.   He also knows the tribe is not getting as much food as him.  Redemption Island is a good place for someone like him because he has the skills to survive on his own.  He feels confident he can beat anyone who gets sent to the island.

Dawn speaks to Cochran because she wants to stay in the game.  Cochran tells her he is willing to change things up.  He thinks it will help him with the juror.  He thinks if he really is seven in line he really has to make a big move.

Immunity Challenge:   They have to balance a bowl of rice on their head filled with rice and then they have to walk with the bowl balanced up to a see saw and balance walking over it and not spilling the rice and/or dropping the rice.  Then they must walk to a container and drop the rice into it.  A difficult challenge but Sophie wins immunity!

Cochran is disappointed in his performance, he thought he would excel in the challenge but he could not.  Dawn is so mad at herself – she had to win the challenge but she did not – she expects to go to Redemption Island tonight after Tribal council.  Brandon is such a loose cannon – Albert seems like he has a brain – they hope for him to rebel.

Albert wants to get Edna OUT.  He wants to move Cochran up the ladder to thank him for what he did for the tribe.  He needs all the jury support he can muster.  Albert is telling everyone Edna is up the butt of Coach.  Albert is trying to get a 5 group to vote out Edna the snake and undermine coach.   Meanwhile Brandon is lecturing Cochran who has double his IQ – LOL.

Albert and Cochran are talking,  Albert convinces Cochran that he is next on the block, this is key.  Now Cochran will side against Coach and obey Albert.  Cochran and Albert look to be working to make their own alliance and take in Whitney and dawn!!  Smart move!

Albert is making Sophie suspicious – he is showing his strategic true colors – Edna brings crap to anyone but coach – they need to dump the snake and make a new mini-alliance.  Coach is placing himself outside the alliance by sticking to Edna.

Coach is a superior Snob- he is as big a snake as anyone but acts as if he were better – he ain’t.

Dawn looks to make her and Whitney the basis of a new alliance with Albert and Cochran – they are playing on Cochrans fears that he is the 7th man – the first to go – Cochran realizes he is in a weak spot – will there be a big ove?  Albert wants a new partition.

Dawn speaks well to convince others to keep her – not to allow coach too much power – Coach is busy trying to play down his power role at Tribal Council but earlier he said he was like the mob boss- Coach is the biggest worm ever.

Now Albert speaks and goes right for coaches throat – he says Coach is NOT leader – Clearly Albert and Coach are not pals = note coach still has the idol -time for the VOTE!!

7TH PERSON VOTED OUT IS Dawn.  She is off to Redemption island – HERE is the twist = another immunity challenge is going on right now and this will be followed by another vote at Tribal Council.

Back to challenge for immunity -Jeff  takes back  Sophie’s Immunity – this challenge is based on answering questions correctly about the past 27 days of survivor.

They vote again right away – Whitney looks to be screwed… Whitney is voted out and sent to Redemption Island.

SO DAWN AND WHITNEY TO REDEMPTION ISLAND

That is it for tonight’s episode, come back and visit us next week, we love having you :-)