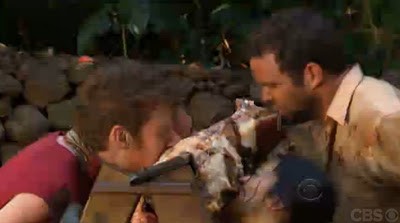 Episode Synopsis: Starving castaways tap into their primal instincts at an intense Immunity Challenge, and a big betrayal shakes up the game at a surprising Tribal Council. Meanwhile, on Redemption Island a scorned castaway seeks revenge by spilling all the secrets of their former tribe, and the third castaway is sent home.

Tonight show’s open with Stacey talking about what happened during tribal council, she is really bitter.  Stacey has decided to spill everything she knows to get revenge on Coach and the other members of her team.

Brandon founds that tribal council was emotional and he is crying because he does not care what people think of him, he knows he is a good guy.

Coach is nervous about Christine and Stacey being on Redemption Island he hopes Stacey keeps her mouth shut.

Over at Redemption Island  Stacey is telling everyone that Coach (Benjamin) is running the show and Albert is his first hand man.

Today’s duel on Redemption Island will require concentration.   To live to see another day on this show one of the two Christine or Stacey must win.  Christine wins and stays alive, Stacey goes home.  Albert feels that Coach is going to be really pissed because Stacey let the cat out of the bag.

Albert gets to the team and tells them it was bad and Stacey went on a rampage and said they were all liars.  Coach is afraid at the merge there will be a target on his back because Stacey told everyone he was running the game.

Back at Savaii, Cochran is still working hard and tells the team ‘He is the little engine that could.’  There team member come back and tell them all Stacey said about Coach.

At Upolu, Albert is afraid he has a target on his back so he is looking for the idol.  He is walking around and finds a clue.  He decides to tell Coach and Sophie about the clue.  Coach of course decides to take matters in his own hands and looks for the idol alone.  Coach finds the immunity idol.  Coach is a happy man now.  Earlier in the day he was upset because of all the things Stacey said.

Cochran is thinking he has to step up because he has no outdoor skills.  He decides to go fishing with Ozzy.  Ozzy feels his position puts him in a stronger position.  Cochran thinks that Ozzy is a lazy ass and all he does is fish.

The teams head for the challenge, immunity is back up.  Each team has their hands tied behind their back, they each have a roast pig they have to bite into the pig, but here is the twist, they cannot eat the pig they have to spit it in a basket.  The team with the most pig in the basket wins immunity and a reward.

Over at Upolu, Brandon is making food and the team is really happy because they won.

At Savaii the team is complaining because they have pig in their teeth. Cochran tells them they are all going to have oral herpes and the team is freaking.

Ozzy is pretty clear that he wants Cochran gone. Cochran is trying to convince people that Elyse should go. He wants to split up Elyse and Ozzy. Jim believes he can get Keith to vote with him against Elyse. It takes Jim about 30 seconds to convince Keith to vote with him. Keith is nervous because he made an alliance with Ozzy and now he feels if he votes Elyse out then they will blindside Ozzy. Whitney is also worried she wants to keep her alliance with Ozzy.

Cochran is not thrilled because at Tribal Council Elyse says the best player are the strong one and defends himself. They only lost the challenge by 2 oz. so no one was really at fault. The team was not pleased by Cochran’s comment today about how they could get oral herpes.

Elyse does not seem happy and neither does Ozzy!  Elyse was totally surprised.   What did you think of the show?