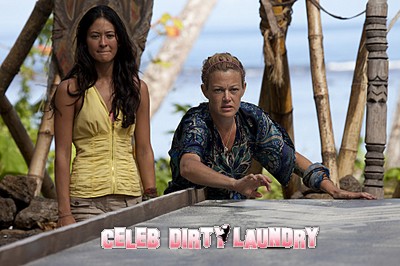 Episode Synopsis: Feeling betrayed by their tribe, one castaway reveals a potentially game-changing secret, and appalled by the lack of loyalty within his tribe, another castaway threatens to leave the game. Meanwhile, on Redemption Island, Christine battles Elyse to try and win her fourth duel in a row and stay alive in the game.

Tonight’s show opens Ozzy saying blindsides are a funny thing.  Ozzy is pretty pissed off he thinks Keith and Whitney went behind his back.  He tells Cochran and the other contestants he is done playing the alliance way and he is now a free agent.  They tell him there are things he is not telling them and they know.  Ozzy tells them he has the idol and now he is playing alone.  He is going to try do the best possible and if it does not work he always has Redemption Island.

At Savaii Ozzy is surprised they voted Elyse out, he does not understand why they did not tell him.  The rest of the team thinks he needs to apologize for the things he said to them.  Jim is happy because he feels his plan is coming together.  Ozzy is not apologizing he is staying alone for the day.  Cochran is hoping that Ozzy continues to be a ‘cry baby’ because it is better for him.

At Upolu Coach is happy he has the immunity idol, he has not told Brandon but that is because he feels he is a loose cannon.  Meanwhile, Brandon is still looking the idol.  He searches in a weird tree and he finds a clue and of course he walks over to Coach and tells them the clue.    Poor Brandon he does not know Coach has the idol and they are not telling him and he is still looking for it.  Coach is encouraging Brandon to look for the idol. (Coach is not nice)  Albert feels sorry for Brandon because he is on a wild goose chase, Albert figures even though Brandon is not a the sharpest tool he will figure out eventually someone already found the idol.

Sophie is really worried if Christine comes back to Upolu they feel she will really flip to the other team.  Edna has been cozying up to Coach because Brandon told her she is not a part of the alliance.  Coach really likes Edna and thinks she is really loyal to him.  Coach tells her she is safe and she feels more confident.

Ozzy realizes his temper tantrum may have been a mistake.  Ozzy talks to Keith and says he really believes the two of them can go to the end.  Ozzy apologizes to the team and tells them he wants to reunify with them.   Jim likes to have Ozzy on his side because of how good he is at immunity challenges.

Immunity Challenge:  The teams will race to assemble a Survivor wheel barrow and push two loads of coconuts through an obstacle course.  Once they get through it they must take apart the wheel barrow to build a slingshot.  With the slingshot they must fire coconuts at targets.  The first tribe to knock down all their targets wins immunity.  Then they will leave and go to the Sliding Rocks a natural water slide.  An afternoon of fun on the water-slides and a picnic lunch.  The winning team will have another clue when they return to camp.  Savaii wins immunity!!

Upolu has the afternoon to decide who is going home.  Coach think Mikayla should go home because she did not listen to him during the challenge and he thinks she deserves to go.

The Savaii team are very happy they won immunity they needed it bring the team back together.  Ozzy and Keith are having a great time and Cochran is watching he is not really a water person.  He decides to brave it and goes up on the slide.

Albert is telling Mikayla that he is going to try and save her.  Albert is trying to get the rest of the team to vote out Edna because he feels that Edna is too tactical.  He convinces all the player that Edna is the one to go and now he has to convince Brandon and Coach.  Brandon is not going to be a hard sell, he feels uneasy around Edna and he wants Mikayla to stay.  However, Brandon being Brandon tells them even though he does not trust Edna he has to keep his word so he is still going to vote Mikayla out.   They are trying to convince Coach to not vote out Mikayla but Coach is really upset about how Mikayla behaved at the challenge.   Mikayla did not listen to Coach and he think she is the reason they lost the challenge.

The team is divided, but Coach is determined to keep Edna.   The vote is basically in the Rick the Cowboy’s hands and he feels he is stuck in the middle no matter what he does someone is going to be mad at him.

Tribal Council:  Coach says that they did not work as a team today.   The team seems to be divided some members of the team think loyalty is important while other think it is not.   Brandon wonders why they are talking about loyalty this week again.  He tells the people at the tribal council that they decided long ago who would be the six and Mikayla should be the one voted out.  Therefore, he feels everyone is bound to vote how they agreed to.

Mikayla is voted out, but she will have a chance to get back in the game on Redemption Island.