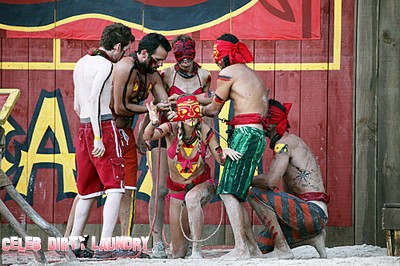 Tonight is the seventh episode of Survivor: South Pacific and it is called ‘Trojan Horse.’  On last week episode Mikayla was voted out.  We will out find tonight if she saves herself at the challenge on Redemption Island.  If you missed last week’s episode you can read our official recap here!

Episode Synopsis: One tribe calls upon the heavens in hopes of changing their luck, while the other tribe is left in shock when one of their own makes a risky move that will go down in Survivor history, on tonight’s Survivor.

Tonight’s show opens with the Survivor going back to the camp after the Tribal Council.  Edna, Coach and the rest of team talk about how Brandon is becoming a liability because of his outbursts at Tribal Council.  Coach alliance his alliance if Brandon  gets out of hand they will get rid of him.

Christine is battling against Mikyala on Redemption Island.  The challenge today is they will take apart a box and use the planks to build a bridge.  To build the bridge is a puzzle in itself.  The former tribe mates are trying to help Mikayla and not Christine.  Once they finish the bridge they take the bridge apart and there are puzzle pieces to find.  Once they have all the puzzle pieces they must build the Redemption Island Arena symbol.

Christine get the puzzle first and Christine stays alive on Redemption Island and Mikayla’s adventure has come to an end.

Ozzy speaks to Cochran to and tells him that they should work together.  He is worried about Christine coming back.   Ozzy suggests that he would allow himself to be voted out so he would go to Redemption Island and battle against Christine.  Cochran is happy about it because if Ozzy gets voted out then he won’t go home.

Coach feels like the tribe is down in the dumps and the team needs a boost in the arm to get the tribe into a more positive mood.  Coach tells his team they have to find the immunity idol.  The snake Coach has the immunity idol and only Alfred knows he has.  So Coach is going to pretend that he finds the idole to make the rest of the happy.  The team goes on the hunt for the idol.

Coach sees they have tree mail.  The tree mail tells them they have to paint their body and wear the best warrior clothes.  They need to choose teams who will be playing and dressed alike.  Coach comes over to the rest of the team members and tells them he has found the idol.  The team is thrilled.

The teams come to the Immunity Challenge and they are all painted up and they look great.  The winner of tonight’s immunity challenge will also get to go to Survivior Movie Theatre and see Adam Sandler’s Jack and Jill which does not open in theatres until November.  They will also get popcorn and everything you eat at a movie.

Ozzy is totally pissed that his team lost since they were miles ahead during the challenge.   Cochran messed up, he did not hook the guide ropes properly.  He really messed up.  Ozzy is so frustrated because he feels that immunity was pulled out of his hands.   Cochran realizes after the challenge there is a target on his back.

They get back to the camp and Ozzy is still complaining about how the challenge was a disaster.  They were so close to winning and he cannot understand why it happened.   Cochran was thinking he was safe but the team is talking about who should go.  Ozzy says he believes that Cochran should go because he was directly responsable for the loss.

Ozzy changes his mind and walks into the camp with his immunity idol he gives it to Cochran.   He tells the team that he should go to Redemption Island to get rid of Christine.  Keith is not happy and he does not wants Ozzy do it.   Jim does not think it is a good idea.  If they do not go to the merge as Ozzy thinks they might the team will be in trouble.

Tribal Council:  Ozzy tells everyone he is going to go to Redemption Island to help the team.  This is his opportunity to play the biggest, craziest move in the game.  Keith thinks Cochran should go home and not Ozzy.  Whitney is not happy either.

Ozzy is vote out and on his way to Redemption Island!