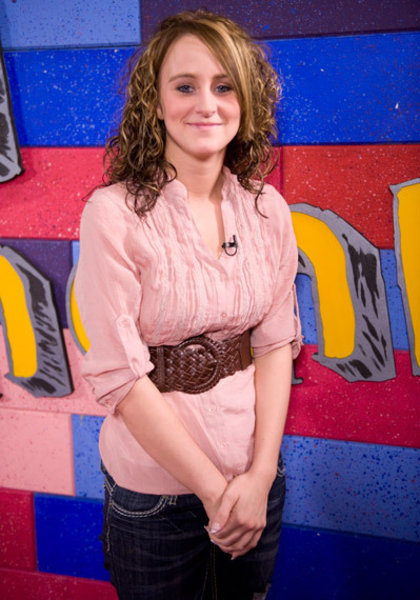 Teen Mom 2 star, Leah Messer, looked to have her young hands full today as she carried her twin daughters to her car, and it seems she may have a third bundle to carry on the way.   Talking about her family’s future, Leah recently revealed: ‘I plan to be through school, and possibly have another baby – Corey really wants a boy.’

But the young mother was clearly struggling already with her existing two children as she made her way out for lunch with her daughters, Aleeah and Aliannah, today.  Leah, 17, was taking the twins, one of whom is handicapped, out for lunch at the nearby Gina’s drive-thru café.

It is a daily struggle for the young mother, who has sacrificed her social and romantic life – given up the essence of what it means to be a teenager – in order to raise her two young girls.  One year on since giving birth to her twin girls and it is still unclear as to whether or not little Aliannah will ever fully overcome her disabilities.  Leah’s life is a daily battle as she learns to face challenges presented by Aliannah’s sight and mobility difficulties.

Speaking of Aliannah’s ongoing difficulties, Leah told In Touch magazine this week: ‘Ali is my little girl, I just want her to be healthy.’
Fortunately, Leah soon had the support of her husband, Corey Simms, who returned  home from work during his lunch hour so that he could help his wife load his beautiful daughters into the car.

A friend told In Touch: ‘She’s doing everything she can to make her marriage work. She knows the girls are already at a disadvantage and doesn’t want them to be from a broken home too.’

The newlyweds, who tied the knot during the final episode of MTV’s hit reality show, Teen Mom 2, have been praised for their decision to put their differences behind them and make a go of their life as a family together.