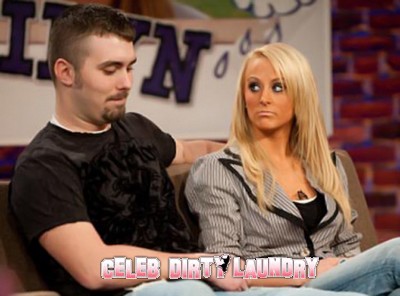 If you have a perverse desire to look into the pathetic lives of some representative members of the American trailer trash club then read on. ‘Teen Mom’ Leah Messer has fled from her ex-husband, Corey Simms, and it looks like she needed to do that in order to protect her physical safety. The couple were divorced after only 6 months of marriage and there has been endless speculation about the precise reasons behind the split.

After being bashed by Jeff, Amy responded with a message of her own, via Facebook and revealed that Corey had gotten physically abusive with Leah during their marriage.

“Your son hit her in the face, and told her to shut up,” Amy told Jeff. “Then before that, he squeezed her whole body, threw a remote through the wall, and put his hands around her neck,” she added.

Could this have been Leah’s motivation in seeking a rapid dissolution to her marriage?

All will be made clear during ‘Teen Mom 2’ season 2, which is set to air this December.