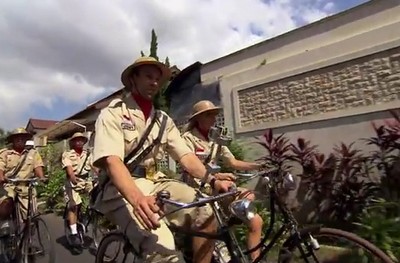 Tonight is the third episode of Season 19 of The Amazing Race called “Don’t Lay Down On Me Now.”  The remaining nine remaining teams depart from the Kraton Palace in Yogyakarta, Indonesia and continue on the third leg of The Amazing Race.  On last week’s episode it was a double elimination and sent home were former Survivors Ethan who won season three and Jenna who won season six, as well as domestic partners Ron and Bill.

This week’s show opens with the teams departing from Kraton Palace in Yogyakarta.  This is the start of the third leg of the race.  Team will join a group of enthusiasts who will join a group of bicycle riders the Colonial Bicycle Guard.  They must dress in the costume from the Dutch colonial era.  They must patrol the streets.  Andy and Tommy are the first out and get their first clue where they have to head in a taxi  to a restaurant in a Village to get their next clue.

While Cindy complains non stop because they completely lost their third place place.  The rest of the team’s head to the village and the restaurant.

Andy and Tommy get to the village and they have a detour.   They have a choice of:  rice field or grass fed.  Once they complete the chores they will get the next clue.

In Grass Fed the teams must collect 2 bags of grass, then get a sheep each deliver them and fill a trowel with water.  Andy and Tommy are still in the lead with Laurence and Zac a close second.   Rice Field has the teams planting 300 rice plants.

The next clue has the teams heading  to an 8th century Buddhist temple.  Rivals Andy & Tommy and Laurence and Zac decide to join forces to figure out the difficult mental challenge.  They have to find four types of Buddhas, count them and then give the judge the count and also show them the four hand positions of the Buddhas.

Amani and Marcus are in last place on the way to the temple, they are frustrated.  Meanwhile over at the temple all the teams are having problems with the challenge.

The two teams that joined up Andy and Tommy and Laurence and Zac are the first to finish the challenge and they must head to the pit stop.  Andy and Tommy try to help Amani and Marcus by giving them the hand signals but they forget when they get to the temple.

Laurence and Zac are team number one to arrive, when they were at the detour they used more buckets than they were suppose to so they have a 15 minute penalty.

Andy and Tommy are the second team to arrive however because Laurence and Zac have a penalty they are team number one and they win a trip to Dubai.

Laurence and Zac get checked in and they are now officially team number 2.

The teams are really having a hard time and a lot of them are working together because team after team is coming up with the wrong numbers.