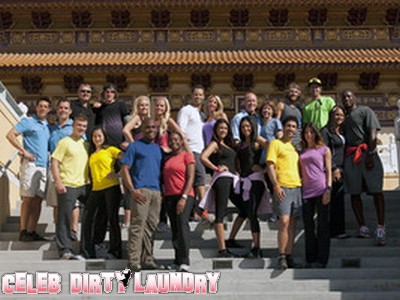 Tonight is the fourth episode of Season 19 of The Amazing Race called ‘This Is Gonna Be a Fine Mess’  The race continues in Phuket, Thailand the eight remaining teams depart from the Borobudur Temple in Indonesia and embark on the fourth leg of The Amazing Race.   On last week’s episode showgirls Kaylani & Lisa were eliminated.  If you missed last week’s episode you can catch our official recap here!

This week’s show opens with the start of the fourth leg from the Borobudur temple.  Snowboarders Andy & Tommy are the first to leave with Laurence & Zac close behind as they make their way to Phuket, Thailand.  All  the teams are getting a flight to Jakarta and there they will catch a plane to Phuket.

The teams are now racing to the Marina to get the next clue.   However because of Andy, Tommy, Laurence & Zac choices they actually arrive in Phuket one hour after the other teams.

Jeremy and Sandy are the first to arrive and they find out the dock does not open until 8AM.   They are amazed they arrived before the guys on the first flight.  When the dock opens the contestants race to the wobbly dock to get their clue.    They have a chance to rebuild Thailand’s tourist industry.   They either have to do Coral reconstruction – dive and strategically place coral in a nursery or they Beach Preparation – where they have to get 20 chairs and 20 umbrellas and help set them up.

Tommy & Andy are the first to finish the challenge and get another clue.  They have to use a compass to find an island13 minutes away.  Their next clue will be there.

Liz & Marie are having a lot of difficulty with the beach preparation challenge.  They cannot life the chairs, they cannot open the chairs and the locals are laughing at them.

Tommy & Andy arrive at the next clue and it is a Roadblock – who wants to be the king of the hill.   The contestants have to climb a sheer rock wall to get their next clue.  Andy decides to do the rock climbing challenge.  Andy is like a monkey and easily gets to the clue.   They are heading to the next Pit Stop which is a floating stadium.

Jennifer & Justin are the next to hit the rock wall and Jennifer does the challenge and they are on the way to the Pit Stop too.

The second team to arrive is Jennifer & Justin.

The third team to arrive is Jeremy & Sandy

The fourth team to arrive is Laurence & Zac

The fifth team to arrive is Ernie & Cindy

The six team to arrive is Amani & Marcus

The seventh team to arrive is Bill & Cathi

The last team to arrive is Liz & Marie but it is their lucky day because it is a non-elimination round.

So no one is eliminated this week!