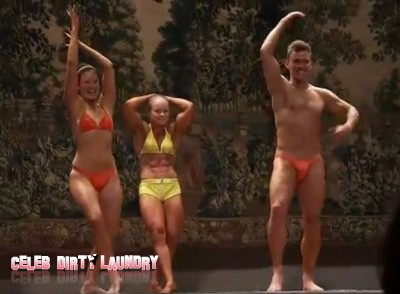 Tonight is the nine episode of The Amazing Race season 19 and it is called ‘It’s Speedo Time.’  Stay tuned as our sister site Fit Fab Celeb covers the show with up-to-the-minute details.   The five remaining teams depart from the Havet Ship docked in Copenhagen, Denmark and continue on the ninth leg of the race.

I’s Speedo Time’s Official Synopsis: – After a potentially game-changing error, one team hopes for a lucky break, and donning only a Speedo for their Detour task, Racers get in touch with their inner exhibitionists, on THE AMAZING RACE Sunday, Nov. 20 (7:00-8:00 PM, ET/PT) on the CBS Television Network. Emmy Award nominee Phil Keoghan is the host.

The preview is hilarious and I am sure tonight’s show is going to be funny.  During a detour the contestants don speedos and paint/spray each other with tanning oil to make themselves looked tanned and to show off the cuts for a body building competition. The teams are scored by judges who are body builders.

At the roadblock teams recite a quote from a famous Danish storyteller Hans Christian Andersen at The Theatre Museum in the Court Theatre in the Christianborg Palace in Copenhagen. The quote is To move, to breath, to fly, to float, to gain all while you give, to roam the roads of lands remove, to travel is to live –  H. C. ANDERSEN.

Our sister site Fit Fab Celeb will be covering the show at 7PM HERE, so make sure to go over and read the official recap, Enjoy!