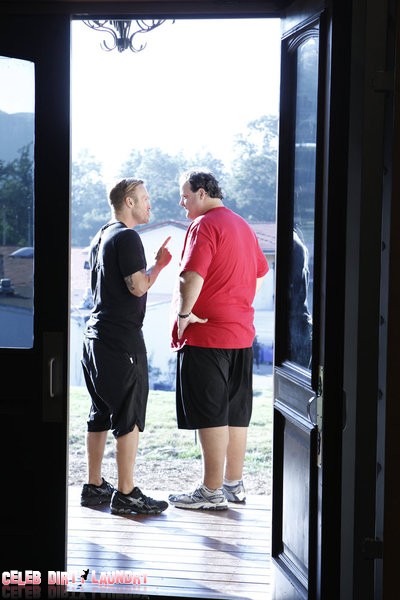 The Biggest Loser is back tonight with the seventh episode of the 12th season.  Last week we saw Jennifer voted out and she will not be the Biggest Loser.  If you missed last week’s episode you can read our official recap here!   The competition shakes up this week when contestants change teams and trainers in a high-stakes, calorie-counting challenge that will determine who each player’s trainer will be for the rest of the season.

Alison leaves and the contestants are speculating about what is going to happen. The Black Team is determined to fight to get what they want and not to let someone else choose their destiny.

The teams all meet in the morning and on the field the remaining contestants see flags with each of the trainers names marked on them. Since the beginning of the season it has been a battle of the ages. Alison have them line up by age and then she has them separate into three groups the three youngest, three oldest and the in-between but they are not the teams.

After the first workout Dolvett decides to cook for his team and shows them how to cook their favorite meal but cook it so there is a lot less calories.

Anna decides to meet with her team again and they are more positive and were very happy with their workout.

Today the contestants will pick their teams in a challenge. Each group will be given 3 dishes with some of their favourite foods before they came to the ranch. The person who guesses the calories correctly gets to pick their trainer, the second place winner will get to pick between the two remaining trainers and the third trainer will get who is left.

After the teams are re-aligned the teams and trainers will remain the same for the rest of the season.

Young group: Jessica has won the first round and she picks Dolvett as a trainer. Second place winner Vinnie choose Bob as a trainer and that means that Ramon will be with Anna.

Middle group: Antone is the closest and he picks Bob as a trainer. Second place winner is Sunny and she chooses Anna and that leaves John with Dolvett.

Joe is upset that he lost Bob but Bonnie is very happy not to have Anna as a trainer anymore.  She says that know she feels renewed and feels she will stay till the end.  Bonnie did not like Anna.

Anna goes to meet her new team. Most of her team are not happy with having to change trainers. Anna tries to convince them it is not that big a deal. She tells them to stop being cry babies,  grow up and man up. Joe is not pleased because she called him a cry baby and tells her so.  Ramon is not happy with Anna either because of comments she made about him and Jessica at last week’s weigh-in.

Anna and her team head to the workout and Anna is going to show her what she can do and get her team to trust her.  Antone is having a hard time and Bob is trying to get him focused on the workout.

Several  dramatic confrontations follow between some players and trainers as they all try to adjust to their new reality.

The new teams face their first challenge together – racing down a water slide on a hill.  Once they get at the bottom each person must take a letter and run back up the hill and then unscramble block letters that reveal the winning team’s prize.

Bonnie decides that after her team has enough letters to scramble she will take a turn.  In the beginning it is slow going for her but then she catches a wave and it pushes her to the end.  However, Bonnie is so tired when she gets to the end of the slide she cannot get up.  All the teams try to encourage her to get up.  Bonnie finally gets up and heads up the hill with her letter.

The new Blue Team won, Anna’s team won the challlenge.  The word to scramble was Immunity 4 – 1.  The three members have to choose one person on their team to get immunity.  The team cannot decide and finally they do rock, paper, scissors and Joe wins and get immunity.

Anna Kournikova and Dolvett Quince each take their teams off the ranch to spice up their last chance workouts.

The Blue Team wins the weigh in.  The Red Team loses the weigh in and one member will go home.  John cannot be voted out because he has the highest percentage of weight.

The Blue & Black Team can vote out either  BONNIE or JESSICA

JESSICA IS VOTED OFF!

Stay tuned and keep refreshing often as we live blog the show with up-to-the-minute details of show!