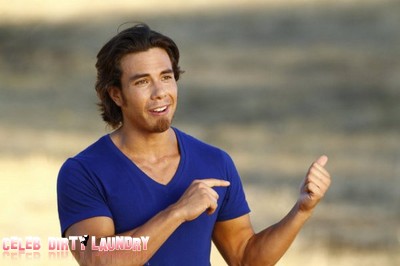 The Biggest Loser is back tonight with a whole new episode.  It is the ninth episode of the 12th season and we will be live blogging it for your enjoyment.  Last week Joe was voted out and he is not the Biggest Loser.  If you missed last week’s episode you can read our official recap here!  If you want to see a sneak peek video of tonight show go HERE!

Official episode synopsis: APOLO OHNO GUEST STARS, AND THE SEVEN REMAINING PLAYERS COMPETE IN A PENTATHLON — The competition heats up as host Alison Sweeney tells the remaining seven players that they will be competing in a pentathlon – and they can only rely on themselves because this week, the game goes to singles. Contestants will earn points in each of the five events, which will test everything from speed to strength to nutrition knowledge. The pentathlon winner gets the coveted prize of immunity, while the loser gets a weigh-in disadvantage. The players get a very special surprise when eight-time Olympic medalist Apolo Ohno arrives to lead the contestants through their final event, motivating them each step of the way. Also, one of the trainers reveals details about their difficult childhood to a contestant who is struggling with trust issues. And later, the weigh-in is followed by the most emotional elimination of the season so far.

Tonight’s episode:  Alison meets with the remaining contestants and tells them that the competition is about to get tougher, actually five times tougher.  The contestants are also informed they are going to the singles.  It is every man and every women for themselves.  For the firsst time this season there is  a yellow line.  This week the pentathlon guarantees that they do not fall below the yellow line.  The winner of the pentathlon has immunity and the person who comes in last gets 1 lb added to their weight.

Event # 1 Merit -They are staring there first event which is Merit.  The contestants are going to rank the other competitor by how much they deserve to win The Biggest Loser.    They will only find out the results of the first competition at the weigh in.  The person who wins this event gets 7 points.  Every contestant has a different strategy.

Event #2 Survival – Each contestant has 3 pegs, they mus run across the tennis court and grab a cover with their name on it and place the cover on their opponents peg.   They will be judged on how long they stay in the competition.   The winner gets 7 points. Sunny wins the event and gets 7 points,  Becky 6 points, Antoine 5 points,  Bonnie 4 points, Vinny 3 points, John 2 points and Ramon 1 point.

The contestants are in the gym working out and now that they are singles and there is a yellow line they are feeling a lot of pressure.

Event # 3 Knowledge – Alison is going to ask them 7 trivia questions about nutrition and if they get a question right they get one point.  Antone wins the challenge with 6 points.

Dolvett spends a lot of time with John this week sharing personal experiences and trying to get John to open up to him and trust him.

Event # 4 Strength & Balance –  One by one the contestants use ropes to pull themselves across a length of water if they fall in they are out.  The fastest player gets 7 points.  Sunny wins the challenge!

The contestants head back to the gym for their last chance workout.  Ramon is in last place for the Pentathlon and he knows he has to work extra hard because he does not want a +1 point to his weight this week.   Dolvett is pushing Bonnie really hard and she tells him she wants to be the fittest she can be at 63.   She works her butt off she does not want to go home this week.

Eight time Olympic medalist Apolo Ohno comes in with subway sandwiches.   He is going to do the last challenge with the contestants.  He tells the contestants how he changed his life with sports.

Event # 5 – Speed – The contestants are going to run one mile as fast as they can.  The course is 1/2 mile and they are going to do it twice.  This is their last chance to win immunity and Apolo is going to run with them.  Ramon comes in first and wins the challenge and 7 points.  Once everyone came in all the contestants ran back and encouraged Bonnie to finish the race.

Apolo was great and he encouraged the contestants, it would be nice if he comes back next season as a new trainer.  He has loads of personality.  The winner of the Pentathlon is Antone and he has immunity.  Bonnie has come in last and she has a 1 lb disadvantage.

The two people who fall below the yellow line will be up for elimination.

Below the yellow line is Becky and Bonnie and they are up for elimination!   Bonnie tells her team members that they can send her home, she wants to see Becky go on.

Bonnie is voted out and she is not the biggest loser and she goes home to see her family!

We are live blogging the show with up-to-the-minute results so keep refreshing often!  Enjoy the recap!