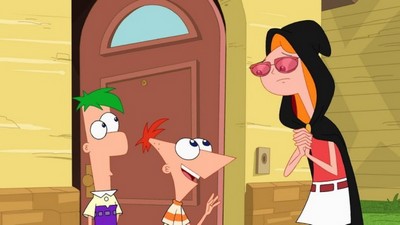 Yes this has happened. If there’s one thing that ‘True Blood’ doesn’t have (because let’s face it, it pretty much has everything) it’s the appeal of the Disney crowd. Yet Friday, something indisputably crazy is happening when the Disney Channel’s Phineas & Ferb (an adorable cartoon) airs the episode “The Curse of Candace”.   The episode will feature ‘True Blood’ stars Anna Paquin (Sookie) and Stephen Moyer (Vampire Bill). Yes the two characters that made cemetery sex famous will appear in cartoon form on one of TV’s most wholesome networks.

Well, they won’t exactly be Sookie and Bill cartoons but rather hilarious True Blood/ ‘Twilight’ hybrids in animated form. Wait, there’s more! Remember “Teen Wolf”? Not the sullen MTV inversion but the one with Michael J. Fox. Fox lends his voice to the episode as well. In a welcome jab at the HBO hit series and the ‘Twilight’ franchise, Paquin’s cutsy cartoon is named Kristen (you know like Kristen ‘K-Stew’ Stewart) and two men pine for her affection (you know like in every Vampire franchise out there). There’s even a shirtless moment, yes even cartoon Werewolves must shed layers of clothing for seemingly no reason.