The Girl With The Dragon Tattoo Poster Revealed…And Oh What A Poster It Is! 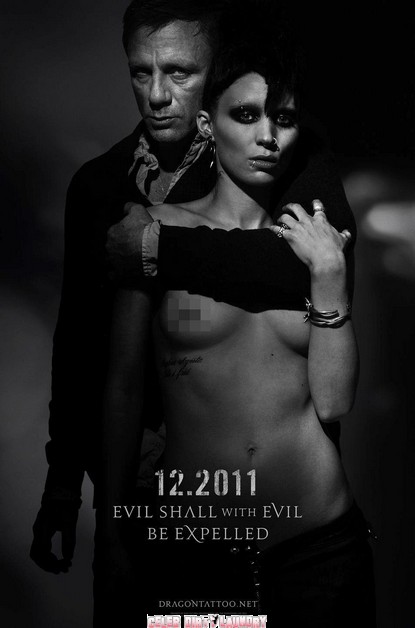 The first poster of the highly anticipated North American version film, The  Girl With The Dragon Tattoo, has been revealed. The upcoming thriller – directed by David Fincher and based on the best selling book written by Steig Larsson – hits theaters in December. It is the first of three, with the talented actress Rooney Mara (The Social Network) portraying the punky, pierced and tattooed heroine, Lisbeth Salandar. Daniel Craig plays journalist, Mikael Blomkvist, who together (and with a 20 year age gap) solves a long ago committed crime. Oh ya, and they get their groove on.

Upon seeing the poster, I can’t say I was that surprised of the extreme nudity and sexuality vibrating from both Mara and Craig. The R-rated poster (Yes! Finally something R-rated!) has Mara completely naked – tattoos and piercing a plenty – with Craig embracing her in a one-armed lock from behind.

You want my opinion? I read the books and I thought they were fantastic – the Swedish movie versions nailed both the book’s story line and conflicted characters. If the feel I get from the poster indicates how I’ll like the movie, it’s safe to say I’ll pretty much love it.